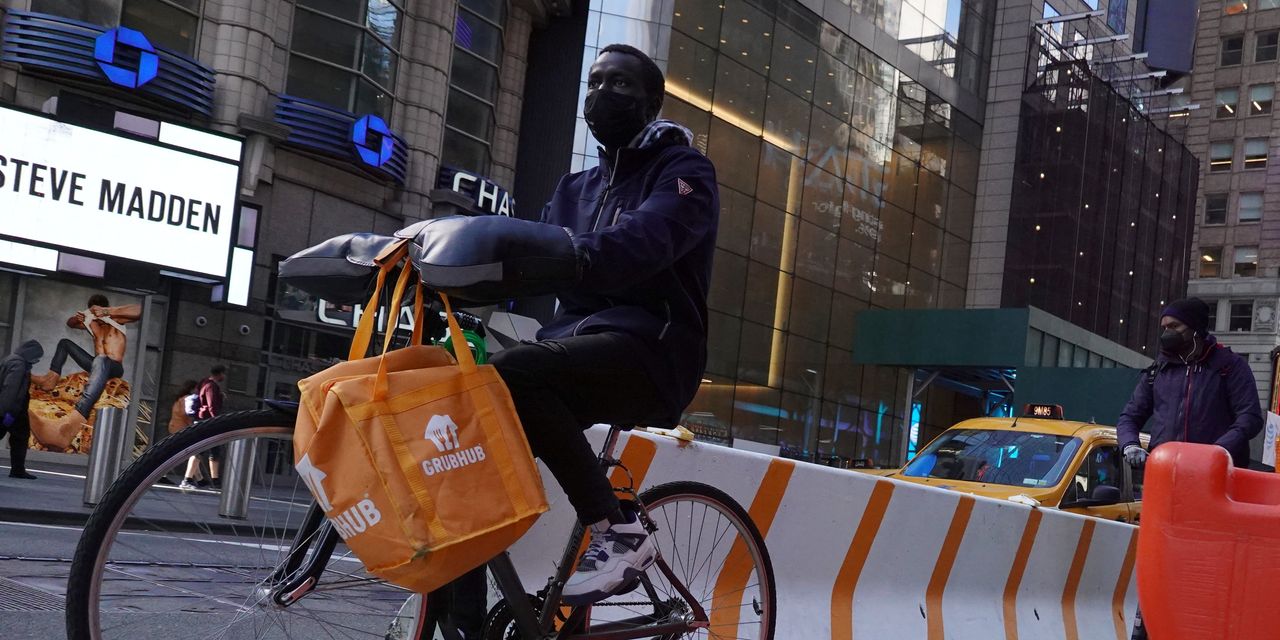 agreed to add Grubhub to its suite of Prime services in the U.S., in a deal aimed at expanding the food-ordering company’s reach by tapping Amazon’s membership program.

NV said Amazon has an initial option to take a 2% stake in U.S.-based Grubhub, and U.S. Prime members can have their delivery fees waived from some restaurants. Just Eat said Amazon could bump up its total stake to 15% of Grubhub based on performance terms, which are focused on adding more food orders and customers to its delivery subscription program.

Just Eat will still own Grubhub and will continue exploring a full or partial sale of the business, it said. The deal will renew annually unless either Amazon or Just Eat terminates it, and Just Eat said it is expected to materially add to Grubhub’s business next year.

The deal brings Amazon further into food-related services through its Prime membership program. The online commerce giant has provided grocery benefits to Prime members under its Whole Foods Market division as a way to make its annual subscription program more valuable.

“The value of a Prime membership continues to grow with this offer,” said

Amazon said last year that millions of Prime members in the U.K. and Ireland would get discounts through U.K. food-delivery company

Amazon will offer Prime members a yearlong subscription to Grubhub’s membership program, which includes free delivery from a network of restaurants, as well as other discounts.

After the first year, Grubhub will begin charging users a monthly fee for Grubhub’s food-delivery subscription service, unless they opt out, Amazon said. Grubhub currently charges $9.99 a month for its membership program, known as Grubhub+.

said the deal will introduce new customers to the company’s membership program and bring more business to drivers and restaurants that work with Grubhub.

Just Eat said it expects the agreement to expand membership to Grubhub’s subscription program and have a neutral impact on the division’s earnings and cash flow this year, while adding to earnings next year.

closed 7.4% lower and shares in

Amazon has a long history of taking stakes in smaller companies with which it does business, often using warrants that give it an option to increase its stake, as with the Grubhub deal. Such deals give Amazon a piece of the potential upside that business partners can get from working with one of the world’s biggest companies, according to a Wall Street Journal article last year that found Amazon had done more than a dozen such deals with publicly traded companies and more than 75 over the prior decade with privately held companies.

Netherlands-based Just Eat said in April that it would consider a full sale of Grubhub after acquiring Grubhub in a $7.3 billion deal that closed last year. Activist investor Cat Rock Capital Management LP, Just Eat’s third-largest shareholder according to FactSet, has pressed the company to focus on its European markets and sell Grubhub.

Cat Rock, which has previously said Grubhub’s logistics network could appeal to e-commerce retailers such as Amazon, declined to comment.

Grubhub was founded in 2004 when most restaurants relied on telephones and paper menus for orders, and was once the largest U.S. online ordering platform. Chicago-based Grubhub in 2013 merged with the New York City-based Seamless restaurant app, and bought other local online food-ordering companies to expand. Grubhub regularly reported profits after going public in 2014.

Venture-capital-backed startups, particularly DoorDash and Uber’s Eats division, began to take market share from Grubhub starting around 2018. Those companies invested in building fleets of couriers to offer food delivery for restaurants that didn’t have their own couriers, including large chains. They often subsidized free delivery deals and other promotions to lure in new customers.

Around 2019, DoorDash eclipsed Grubhub as the largest U.S. food-delivery platform, and DoorDash and Uber Eats have steadily gained market share since, according to data compiled by Edison Trends. Those companies built up bigger delivery fleets in the suburbs, started membership programs and began delivering other consumer goods earlier than Grubhub did. Grubhub now is the third-largest delivery app, industry data show.

Grubhub gained sales after the Covid-19 pandemic hit, and restaurants closed dining rooms. But Grubhub suffered after dozens of local governments implemented caps on the commissions such apps charge restaurants, a move aimed at helping small businesses struggling during the pandemic. Municipalities have let many of those caps expire, but they continued to hurt Grubhub’s profit, Just Eat told investors last fall.

Food-delivery-app spending and orders posted their slowest two-year growth in May, according to market-research firm YipitData. Monthly sales at DoorDash, Uber Eats, Grubhub and Waitr Inc. rose 17% year-over-year after more than doubling every month in mid-2020 and early 2021. The growth was led by DoorDash and Uber Eats, while Grubhub’s sales and order volume fell in recent months, according to YipitData.

Grubhub has sought to increase deals with big chain restaurants and other merchants. It started Grubhub+ in 2020 and began offering perks to users of other services, including deals with

and Instacart Inc. to tie in Grubhub+ to those companies’ membership programs.

Amazon Prime has become a crucial loyalty program, giving its more than 200 million members added incentive to rely on the e-commerce giant as their go-to destination for shopping.

Amazon earlier this year raised the price of membership to $139 annually from $119, and it has continually added offerings for members to make the program more attractive, from broadcasts of the National Football League’s Thursday-night games to an initiative launched in April that will extend its Prime delivery services to other merchants’ websites.

Last year, Amazon said it would make Grubhub+ available free of charge to student subscribers of its Prime program.

contributed to this article.