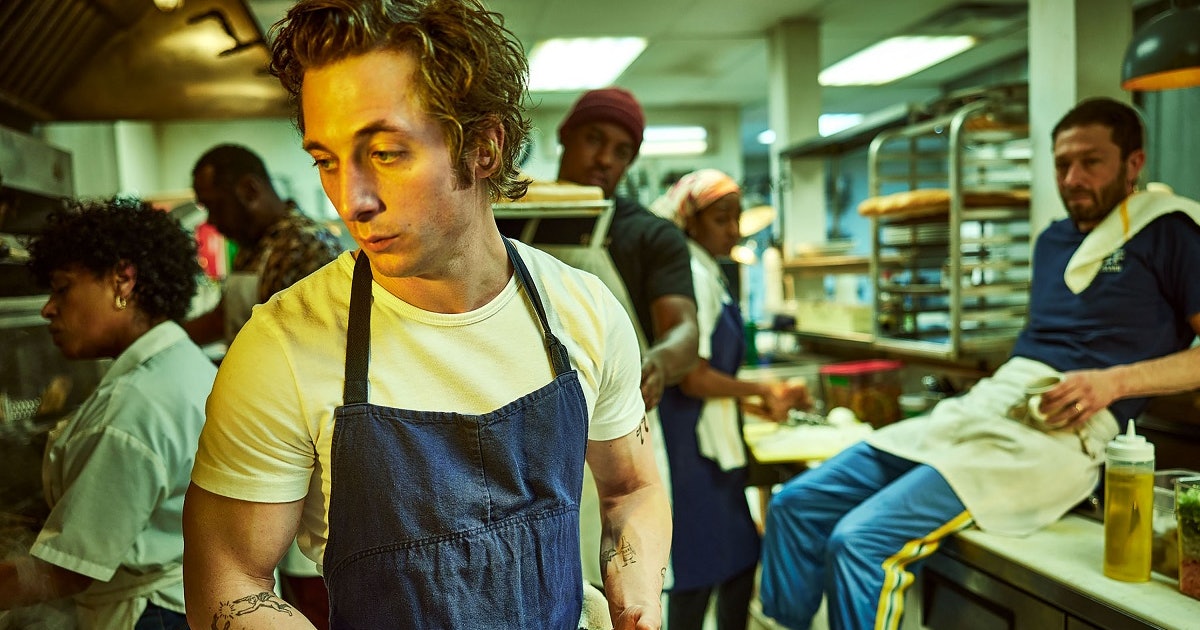 When you think of television shows about cooking, where does your mind typically land? Perhaps on reality competitions like Top Chef, Iron Chef, Chopped, or anything from the Gordon Ramsay empire. Maybe you think of the slow-motion shots in Netflix’s Chef’s Table, accompanied by swelling classical crescendos—or even those fictional attempts at an accurate portrayal of the restaurant world, like Starz’s Sweetbitter and Fox’s short-lived Kitchen Confidential. Still, no culinary-based series has been able to capture the tense atmosphere of a restaurant kitchen. FX’s latest production, The Bear, has arrived to change all that.

The Bear wastes no time introducing you to the chaotic world in which it exists, immediately plunging you headfirst into its claustrophobic center: a sandwich shop in the Midwest. After spending the past decade as Lip Gallagher in Showtime’s Chicago-set dramedy Shameless, Jeremy Allen White’s return to the city is equally intense and brimming with family dysfunction—if not more this time around. In The Bear, he plays Carmen “Carmy” Berzatto, an accomplished, James Beard Award-winning chef who has worked at some of the world’s finest Michelin-starred restaurants. That is, until he inherits his family’s old-school Italian sandwich joint, The Original Beef of Chicagoland, after his older brother Michael commits suicide, causing him to return to his hometown to pick up all the pieces and keep the restaurant running.

Created and partially directed by Christopher Storer, The Bear is authentic and grounded, with a keen understanding of the cutthroat food scene while also subtly poking fun at it (see: when Carmen attempts—and fails—to introduce a “French brigade”-style hierarchy in the kitchen). Using fast cuts, close-ups, and montages, the series submerges you in the inner workings of the kitchen, from the food prep to the myriad financial problems that Carmy must juggle, and the traditional “family meal” that brings together the entire staff. With most episodes clocking in at under 30 minutes, The Bear expertly balances its dramatic tones with dark comedy; it never overstays its welcome while still being developed enough that you care about what’s happening—and the one-take penultimate episode, “Review,” chronicling a busy day in the kitchen, fully ups the ante. No matter how distressing the state of the back of house is, everyone is bonded by their passion and unwavering commitment to their craft because, at the end of the day, there is always a task to be completed and food to be served.

The heart of the show is Sydney Adamu (played by comedian and Big Mouth star Ayo Edebiri, who is bound to be a star if she isn’t considered one already). Sydney is a passionate and confident culinary school grad who works as a sous chef, despite her impressive résumé and bright ideas. As the series progresses, her undeniable chemistry with Carmy turns their relationship into the show’s focus; they’re both mirrors of each other, having come from similar culinary backgrounds. Rounding out the ensemble are Ebon Moss-Bachrach as Michael’s obnoxiously loud best friend, Richie, who helps run the shop; Liza Colón-Zayas as Tina, an employee who has been working at the restaurant as long as it’s been around; pastry chef Marcus played by Lionel Boyce; and Abby Elliott as Carmy’s sister, who has spent her entire life trying to hold the family together. It’s hard not to root and care for every character, who are each flawed yet likable in their own wrenchingly human ways.

Whether its depiction of Chicago is accurate is very much up for debate, but The Bear certainly nails the mayhem of what it’s like to operate a restaurant. There isn’t a minute in the series that isn’t entirely anxiety-inducing, both for its characters and its audience—but the scenes that raise your blood pressure are balanced out by moments of tenderness and true heart. It’s equally compelling and stressful, which is what makes it so beautiful. If Uncut Gems and Hell’s Kitchen had a baby, it would be The Bear. And I guarantee you’ll be saying “thank you, chef” by the time you’ve finished binge-watching it.