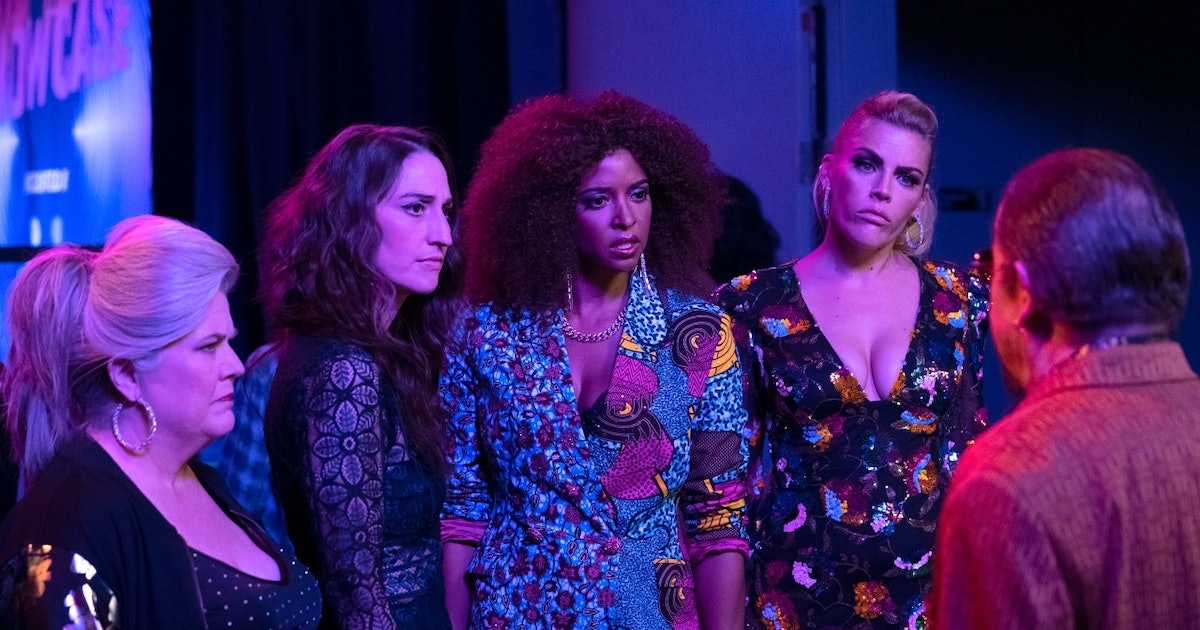 In the first season of Girls5eva, we meet the titular group through a TRL performance during their brief moment in the spotlight in the early aughts. It’s a fitting introduction to the vibrant girl group and delightfully nostalgic atmosphere that envelops the Peacock series, which recently wrapped its fantastic second season.

The comedy series, created by Unbreakable Kimmy Schmidt writer Meredith Scardino and produced by Tina Fey and Robert Carlock, centers a one-hit-wonder Y2K band as they reunite to attempt a comeback—which is especially tricky to pull off in the digital age (as a Swedish songwriter played by guest star Stephen Colbert notes in the first season, “It has been an entire Zendaya since you recorded music.”) The amazing yet under-promoted sophomore season picks up with the group diving into their next album after a successful Jingle Ball performance in the season one finale. Meanwhile, they each face challenges in their personal lives. Regardless of whether they’ll achieve the pop stardom they’re gunning for, you can’t help but cheer for their success—especially after seeing the joy they experience when performing.

What makes Girls5eva special is that every role feels tailor-made for its stars. Busy Philipps is a perfect match for the ditzy aspiring Real Housewife Summer; Renée Elise Goldsberry steals every scene as the Wickie, a social media influencer running a glamorous “fempire” who feels cut from the same cloth as 30 Rock’s Jenna Maroney; Sara Bareilles plays Dawn, considered the most grounded member now that she’s a mother, wife, and manager of her brother’s restaurant; and there’s Gloria, played by SNL writer Paula Pell, a dentist who made history as one-half of the first gay couple to divorce in the state of New York. Every so often, Ashley Park appears as Ashley, the fifth member whose absence I won’t spoil for those of you who haven’t tuned in.

Packed with parodic music videos, witty jokes, memorable one-liners, and over-the-top performances, Girls5eva hits all the right notes when balancing the nostalgia-centered satire and its exploration of the music industry. The heightened entertainment world in which the group operates is hilariously absurd: all publicists are named Amanda, and the Property Brothers own a record label demanding that Girls5eva finish an album within six weeks. The songs, penned by composer Jeff Richmond in collaboration with the show’s writers, are so infectious and catchy you’ll immediately want to find them on Spotify.

Beneath all the humor and pop culture references that bear the hallmarks of a Fey production, the series is also an authentic portrayal of female friendship and aging. The supportive dynamic that blossoms among this group of polar-opposite women who spent the past two decades apart feels real and organic, even if the foursome is often divided into the same two pairings. Girls5eva also manages to be equally genuine when it tackles how women, especially in the industry, are treated once they reach their 40s and how social media has changed the way we live and consume media.

Girls5eva is a goofy show that is nothing short of being constantly entertaining, and there’s just as much sincerity and love among its quartet as there are jokes. While Peacock has yet to build up a catalog with titles that can be considered serious competition, it’s easy to crown Girls5eva as the streamer’s most brilliant original series to date. If you have yet to give it a try, then, as the series asks, “What are you waiting five?”