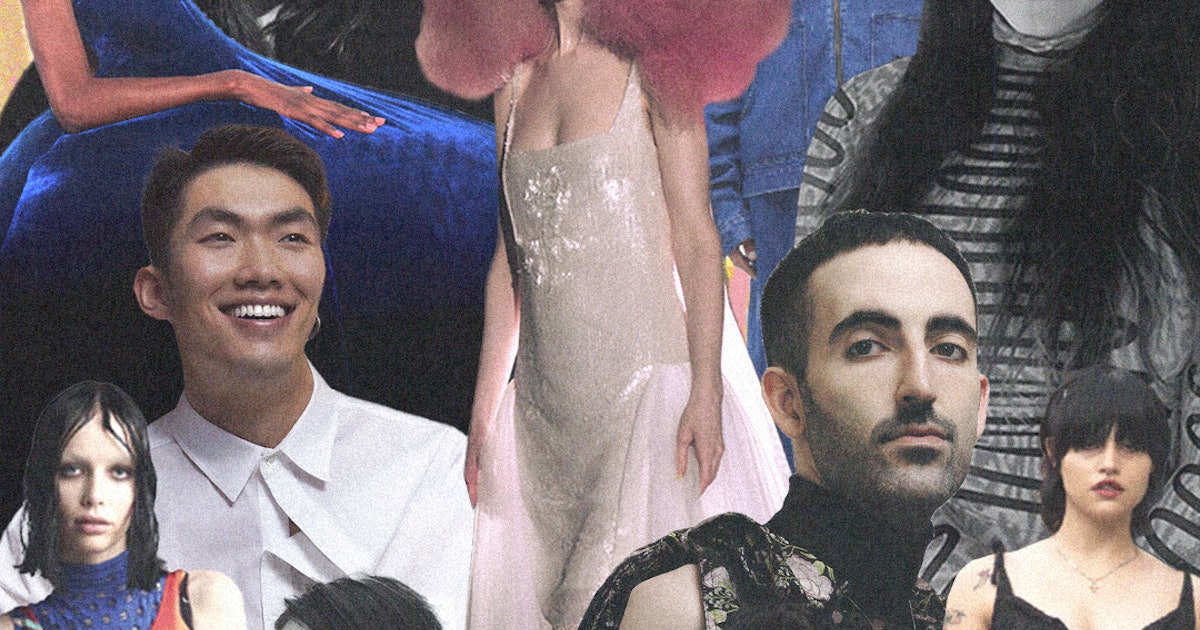 New York Fashion Week is nearly upon us. And if you’ve attended previous seasons, this one’s calendar will give you flashbacks to just how packed it used to be. Some of the highlights are obvious—Tom Ford, anyone?—but there are others you’d do best not to let slip through the cracks. Here, a roundup of the five labels and designers to keep on your radar in the week to come.

Maisie Schloss came up with a rather genius method of creating her latest Maisie Wilen prints: entering around 20 of the most disparate things she could conceive into the AI image generator DALL-E. “I was just putting in a lot of very abstract prompts and stock images to get strange textures as a starting base,” she says with a laugh. “They were all insane—like, lip gloss, space with dark shadow… the more abstract and bizarre, the better. That’s how you get the most absurd, amorphous extractions.”

Schloss’s design process is entirely digital; she primarily uses Photoshop and Illustrator. And in keeping with the collection’s “hyper-digital aesthetic,” she plans for the set of her showing at the downtown exhibition space Performance New York to mimic a green screen. Since she’s been taking inspiration from CGI and special effects techniques, some models will even have markers—“like what you see in ‘making of’ videos for movies like Lord of the Rings.”

First known for the featherweight jersey designs favored by the Kardashian-Jenners, Maisie Wilen is growing more associated with the digital sphere. Schloss has plans to expand the garments she makes for both online and IRL; in the case of the latter, her offerings now include evening gowns and menswear. “People our age and younger came up with fashion and just media in general being so on the internet,” she says. “So it’s hard for me to separate the two—or see the reason why I would.”

For Terrence Zhou, Bad Binch Tong Tong is all about authenticity. “I think it was Vogue or something that uploaded one of my progress photos today,” he says, clearly amused. “There are a lot of flies in my studio, which is really messy, and the photo they used has the electric racket we use to hit them on the table.” The designer has never been afraid to be himself—and there sure have been a lot of versions of himself over the years. Born in Wuhan, China, where he danced in national competitions, Zhou moved to the U.S. when he was 17 to earn his degree in math and science. He was interning at a bioengineering tech startup in San Francisco when he realized he missed the arts, prompting him to transfer to Parsons (where he graduated in 2020) and turn his bedroom into a design studio.

Since Zhou’s past jobs were all related to his former career path, the only designer he’s ever worked for is himself. But you’d never guess from the level of craftsmanship and development of Bad Binch Tong Tong’s brand identity. His creations are instantly recognizable, often bordering on sculptural. The most avant-garde are made of found materials; Zhou name-checks Jeff Koons and Louise Bourgeois when discussing his aim to elevate and make people rethink everyday objects like inflatables. And names like Rina Sawayama, who repped the label on one of her album covers, have taken note. So has the press, despite Zhou never doing marketing or outreach. His team recently took stock of how many times Bad Binch Tong Tong designs have appeared on the cover of a publication and arrived at around 75—not bad for a brand that didn’t have enough resources to mount a runway show just a year ago.

Zhou’s label’s first showing will take the form of a dance performance (in which he’s considering participating). In the lead-up, many have been asking about why he chose “Bad Binch Tong Tong” over “Terrence Zhou.” The answer: Tong is his real name—and, well, would you really disagree that he’s a bad binch?

Whereas most designers vaguely wax poetic when asked about their inspirations, Elizabeth Hilfiger is refreshingly blunt. “This season, my inspiration is that I really can’t deal with heat,” she says on her way to New York from Los Angeles, where her warehouse studio is located. “I hate being hot—I just become a raging bitch.” Fellow cold-blooded folks, take note: Hilfiger enlisted the wearable technology brand Techniche to turn the cooling workwear it typically designs for, say, construction workers and Olympians, into high fashion. And if you’re doubtful of the materials’ effectiveness, Hilfiger is also offering Foo and Foo-branded ice packs.

It’s no accident that the Foo and Foo logo is everywhere in Hilfiger’s designs: As she’s sure you’ll have guessed by now, her father is none other than Tommy Hilfiger. (In fact, she jokes that she’s been waiting for me to ask about him when I do so—prefaced with an apology—just 10 minutes into our call.) “He’s definitely always saying, ‘Where’s the logo? Where’s the logo?,’” she says with a laugh. “I had a friend consulting with me a few seasons ago and she was like, no, don’t put it there—it doesn’t need it. And I was like, ‘My dad will have my head if I don’t!’” They share an appreciation for what could be characterized as “American” design, but it almost goes without saying the industry vet would never even think of showing at the Lower East Side’s sprawling Master Kitchen Supplies—a move that Hilfiger considers in keeping with the brand’s current iteration as “utilitarian basics that are fun, cool, and a bit naughty.”

Plus, in what doubles as her post-lockdown comeback, Hilfiger is taking a risk: Not all of the looks are clearly branded. Well, kind of: “Unless you include a button as a logo.”

For Jackson Wiederhoeft, fashion and dance—specifically ballet—are inextricable. Lest you get the wrong idea, a look at just one of his designs will assure you that his namesake label has nothing to do with so-called “balletcore.” The CFDA/Vogue Fashion Fund finalist’s upcoming show (which, as in seasons past, incorporates dance performance), will be some of the industry’s introduction to the brand.

Wiederhoeft is a self-described introvert who loves to surround himself with extroverts, making it no surprise that lately, he’s been dressing comedians like Chloe Fineman and Rachel Sennott. If his success with that specific crowd continues at this rate—helped along by his CFDA mentor, Bergdorf Goodman’s Linda Fargo—the comedy scene is about to look very different. For Wiederhoeft, spring 2023 is all about metal. There’s enough of it in this collection that he estimates one of the skirts weighs 40 pounds.

The CFDA win made Wiederhoeft reconsider whether or not he’d show this season, and he couldn’t be happier that he decided to say yes. He’s gotten more ambitious than ever, upping the number of looks in his collection from 16 to 26. “I mean, we’re all just like drama club nerds,” he says. While his designs are nothing like those of Thom Browne, he shares the same appreciation of theatricality and production value that left him “gobsmacked” when he worked for the designer. And with his latest, he’s embraced those qualities more than ever: “It’s like a dream come true to create such a performative piece.”

Gauntlett Cheng is such a key part of the underground New York design scene that its three-year absence from the calendar has been truly felt. Now, Esther Gauntlett and Jenny Cheng are back—and ready to take it up to 11. From the very start—when the label was known as Moses Gauntlett Cheng, back when they were designing with Vaquera’s David Moses—the brand has been the pair’s passion project. When I first spoke with them a few years ago, Gauntlett was working at Aesop and Cheng was knitting for brands like Calvin Klein; these days, the former is doing finances at an architecture company and the latter is a project manager at the gallery David Zwirner. And while they may technically be designing on the side, Gauntlett Cheng has become so popular that they’re actually earning money from the brand.

It’s a new era for Gauntlett Cheng in more ways than one. They’re more energized than ever—especially now that they’re going forward with their plans to ignore the fall season. “We were never happy with those clothes, and the shows were always, like, a disaster,” Gauntlett says. “The clothes always reflect our moods. We looked back and were like, Wait—all the fall shows are so depressing, and all the spring shows are so celebratory and fun.” Then, they asked themselves a question: What do they want to make, and what are they good at making?” The answer: “really fun, sexy dresses.” Two years into their exclusive partnership with SSENSE—and, as Cheng notes, the pieces that they stock are also all handmade—the pair has gotten a good handle on what sells. Now, they’re “completely” pushing against that; a look may incorporate, say, eight yards of fabric, no matter the cost.