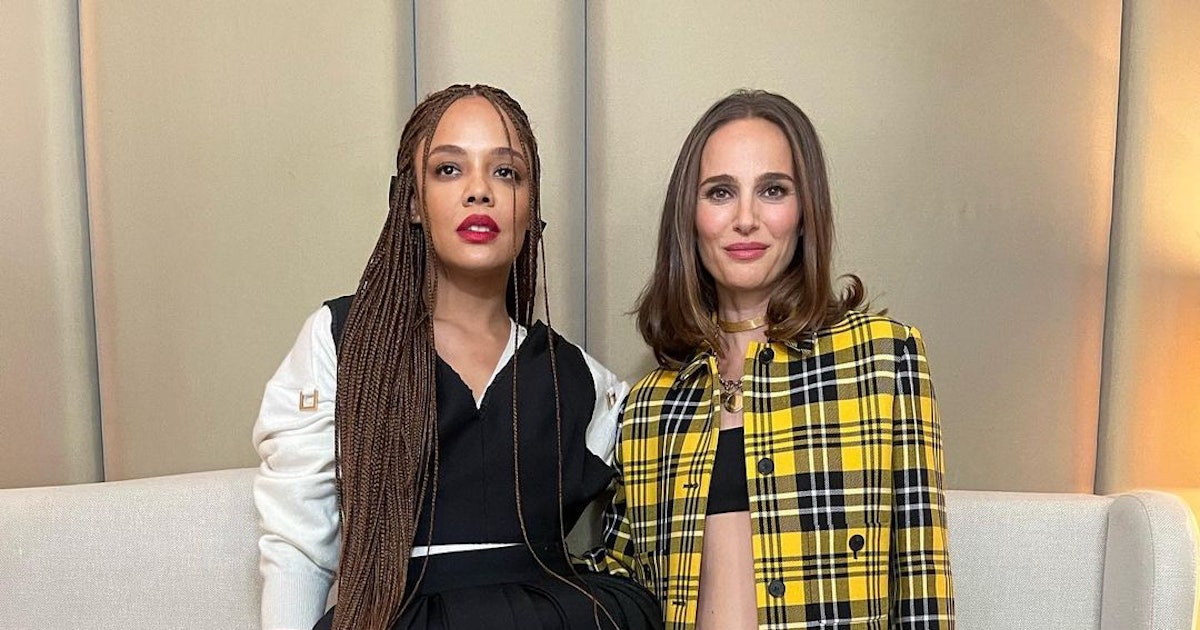 Marvel movies are a dime a dozen these days, and while each project is packed with enough stars to keep us at least slightly interested, the seemingly never-ending promotion cycle for the MCU industrial complex can get tiring. Right as the Eternals premieres came to a close, it was time for the new Doctor Strange to have its time in the spotlight. And now, we’re on to the latest Thor film. Luckily, though, Thor: Love and Thunder has the benefit of starring Tessa Thompson and Natalie Portman, and they’re bringing a lot of very necessary life into the promotion cycle.

The duo started off strong earlier this week, with Portman showing up to a screening in London in a shortened red dress from Dior’s resort 2023 collection, joined by Thompson in a metallic beaded Oscar de la Renta resort 2023 gown. On Tuesday, though, the pair went slightly more casual for a press junket, embracing some major Clueless vibes in the process.

Portman almost directly referenced the movie with her outfit, a look from Dior’s pre-fall 2022 collection featuring a skirt and jacket set in the same black and yellow plaid that Cher fans across the world look for every October when trying to embody the character for Halloween. Portman paired the set with a black bralette underneath the cropped jacket and a pair of classic Doc Marten boots, adding to the ‘90s aesthetic of the look.

And if Portman is Cher, Thompson is most definitely Dionne. For her school girl look, the actress pulled from the Louis Vuitton fall/winter 2022 runway show, a black top and a-line skirt with a cream v-neck sweater underneath (so as to not get any way harsh school dress code violations, most likely). She then finished off the ensemble with some Louis Vuitton slingback heels, a bright red lip, and, of course, a large bow in her hair.

Together, this pair could convince anyone they need a makeover, and while Clueless is pretty much an untouchable masterpiece that should be kept away from the IP-hungry Hollywood execs, these looks have us thinking it might just be time for a remake, and we have the perfect actors in mind.