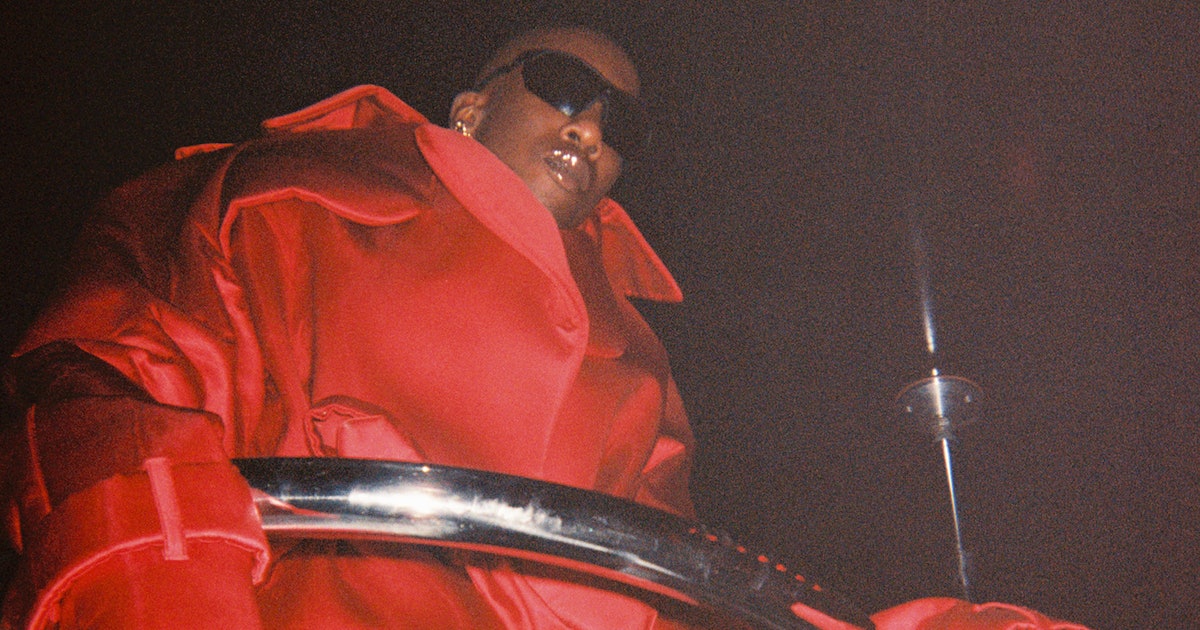 “I like clashes rather than things going smoothly,” Lantink says with a laugh, seated in his studio just a few days before the show took place on September 1. His design team nearby was in the midst of putting the final touches on a globe-like silver jacket inside the raw and industrial studio space, and a massive heap of coats were piled onto the designer’s favorite place to dream up new designs: his couch. Ever since he can remember, Lantink has been interested in taking apart designer garments and splicing them back together, or remaking existing work into new things entirely. When he was 12, he took his grandmother’s tablecloth and combined it with dad’s Diesel jeans to create a miniskirt. He also has an affinity for collaging designer shoes in a manner not unlike Frankenstein.

The list of extreme upcycling projects Lantink has been involved in is endless. He had his first runway show just last year; for his May 2022 presentation follow-up, he tapped members of SistaazHood, a support group for trans women sex workers in Cape Town, with whom he’s worked for almost a decade, to host a cinematic and emotional show in which each model styled themselves. He’s also gone on to dress the celebrity set, designing pieces for Billie Eilish and Janelle Monáe (remember those vagina pants she wore in the “Pynk” video?), Doja Cat—and most recently, Beyoncé, for her latest Tiffany’s ads.

“I have a very expensive taste,” he says. “I always pick the most expensive stuff, but it’s not that I think, ‘Oh, this might be expensive,’ I just like the design.” Heavily inspired by his mother’s sense of style growing up, his first taste for fashion came around when he witnessed her collection of Jean Paul Gaultier and Margiela. “​​In the late ‘80s, in Amsterdam, there was a huge party scene and I was always looking at my mom dressing up,” he says. “I was obsessed with those clothes rather than materials. So for me, it was really looking at fashion from a styling point of view, and it was logical to cut those things up and mesh it and create my own world out of it.” And despite multiple labels as a sustainable brand, “The idea never came from, ‘Let’s start recycling.’”

Because of that, Lantink’s pieces are one-offs, each unique. “I don’t want to necessarily call it couture, but I think it’s very important that you find your unique style in a way,” he says of the main message behind his brand. “It’s important for the people that like my clothes or want to buy my clothes. They don’t necessarily have to be part of a group or community. It could be very much individual persons that like to express themselves in a [certain] way.”

For the aforementioned Steve Madden event during Amsterdam Fashion Week, Lantink was careful to not refer to it as a collaboration, but rather an “evening curated” by him. Bags and shoes from the so-obviously-polar-opposite Steve Madden brand lined the intimate Moulin Rouge club’s walls, as various acts, chosen by Lantink, stepped up to perform. The headliner of the night, Virgen Maria, opened the event wearing a laser bra and closed out the venue alternating between pole dancing and DJing, wearing Lantink’s globular jacket before stripping down to sunglasses, a G-string bikini, and her signature pout. The artist Berat Bebek swung around the pole to the tune .Perhaps most visually stunning of all was singer and movement artist Christian Yav in an oversized, boxy red suit, whose performance verged on spiritual.

“The Red Light district has been seen as touristy and druggy, but somehow it’s the most beautiful part of Amsterdam,” Lantink says. “I really wanted to do something to also pay respect toward sex work and all these activities that go on in the neighborhood.”

Lantink’s aesthetic is totally extreme, slightly meme-like, and deeply personal to him. Think: full-length leopard coats, slashed from existing Dries Van Noten and Stand Studio jackets; or puffy black dresses, created from Balenciaga and Acne Studios garments. “​​It’s always been like, ‘I think that sleeve would be a great top, or those pants would be a great dress.’ That’s just my way of thinking.”

Sure, Lantink is part of the now-ubiquitous generation of designers who upcycle, but rather than take scraps of fabric or hand-me-downs, he’s not afraid to cut up splurgy designer fashion. Another thing that stands out about Lantink is his perspective on the title of “designer.” He easily shifts between calling himself an artist and a curator. “I like it to be open,” he says. “If you search for materials, you’re also curating the material,” he says. “Having an eye to see what works or what doesn’t work is what I’m exploring now.” Next up, the designer will be moving to Paris full-time, and will unveil a couture show in the city in January. If his latest show was anything to go by, it’s sure to be revolutionary.