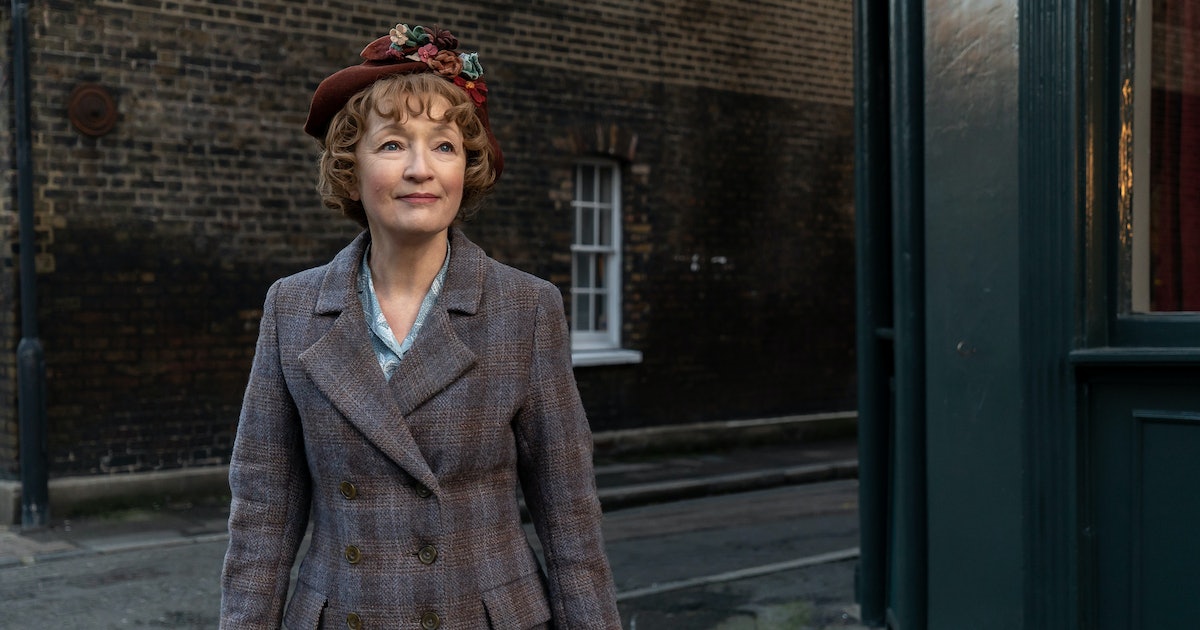 Early on in our Zoom call, the English actress Lesley Manville expresses palpable relief when I tell her I haven’t recently been as excited for a movie as I’d been for her latest showing, Mrs. Harris Goes to Paris.

“When you came on I thought, ‘Oh god, it’s a young person. They’re not going to like this film,’” she says. “But I’m so glad you did!” (I also inform her there’s a subsection of young gay men who love this sort of British cinema for its pleasant, Sunday-morning vibes. “Of course,” she chuckles. “And nice frocks.”)

And how could I not love Mrs. Harris, which stars Manville alongside Isabelle Huppert and Emily in Paris heartthrob Lucas Bravo? It’s essentially the nicecore spiritual sequel to modern masterpiece Phantom Thread, which scored Manville an Oscar nomination in 2018 for her role as Cyril Woodcock, the exacting sister of an arrogant couturier played by Daniel Day-Lewis.

But Mrs. Harris Goes to Paris, in theaters this Friday, is more Paddington than Paul Thomas Anderson. Based on a 1958 bestseller, it’s the cheery tale of Ada Harris, a cleaning lady in 1950s London who resolves to secure a Dior gown after coming to terms with her late husband’s death. After coming up with the money for a two-day jaunt to Paris, she extends her trip thanks to the kindness of a nerdy-cute Dior accountant (played by Bravo) and a sweet model with a penchant for Sartre (Alba Baptista).

It’s the kind of movie you fall into, never wanting to come back up after it’s begun. Everyone’s alarmingly nice, and if they’re not, then they’re a deliciously catty fashion directrice played by Huppert. The stakes are comfortably, how you say, on the floor, but they’re there: despite Ada’s refreshing working-class humor and guilelessness, charming every Parisian she encounters, Huppert does not want to dilute the Dior brand by honoring her cash payment. With that mid-century English firmness, Harris entices the other workers at the legendary fashion house into helping her dream come true—elegant fittings, private fashion shows, and starry nights on the town abound.

“I’ve always loved clothes, I’m a bit of a wardrobe freak,” Manville says, citing Stevie Nicks and Kate Bush as early fashion icons. Those influences, like Mrs. Harris, are a near-180º from the severity we’ve come to expect from the English actor, who’s garnered an Olivier Award and two BAFTA nominations throughout her 50-year career and is best known for her darker work with director Mike Leigh.

The morning before Mrs. Harris’s East Hampton premiere, the composed-yet-utterly-charming Manville flexed her sartorial muscles, guiding me through her current wardrobe and the way fashion dictates her performances.

How important is costuming when you’re crafting a role?

The costume is vital, as well as hair and makeup. I’m looking at a script—and I’m talking about pre-pre-pre production—trying to work my way through it, and create this character. In the case of Mrs. Harris, it’s not just the big Dior frock. It’s mostly about getting her clothes right in her day-to-day life. Like most women at that period, she’d have been okay at sewing and mending, so we had her liven up her own clothes with her own little embellishments and flowery bits. I got to collaborate with the really brilliant costume designer, Jenny Beavan—you know, she hasn’t got three Oscars for no reason. She brings so much that helps me go, “Yes, I get that now. I get where this character’s coming from.”

Did you pick up any fashion tips or new looks while working on the film?

Um, no, not really. Because I’ve got great style of my own.

I grew up in Brighton, on the south coast of England, which is a little bit bohemian, a little bit hippie. So I just adored Stevie Nicks, I used to wear all that floaty stuff, like Kate Bush. As I’ve gotten older, I’ve probably got more sophisticated and maybe a bit more elegant. But not stuffy—I still want it to be a little bit edgy. At the moment, I’m into nice, clean, baggy trousers with a nice shirt or something silk on top. I’ll definitely do a great Christian Dior jacket with a pair of seemingly casual trousers. I don’t want to look like “Mrs. Middle-Class Conventional.”

There was a period when I was much more, rolled-up jeans and a smock-y top, but that’s when I had a young kid around. That’s the great thing about fashion—there’s so much influence out there, and it’s always evolving.

Are you aware of the renaissance Kate Bush is having?

Did the “Running Up That Hill” era influence you, or was it the earlier “Wuthering Heights” stuff?

Yeah, that was all a bit later. Earlier than that was Stevie Nicks; I used to wear lots of floaty things: fringes and hats and all of that stuff.

Who was your first fashion icon?

I hate to mention her again, but it really was Stevie Nicks. I used to buy a lot of Laura Ashley clothes—all of these flowery, floaty looks that became a synonymous with the home counties look. But when she first started out, it was quite an interesting look. I was wearing it in the mid ’70s, which had a kind of vibe to it.

You were born a year before the original book, “Mrs. Harris Goes to Paris,” was published. Did you already have a relationship to fashion around then?

It was a difficult time, because we were coming out of the Second World War. People think that the war stopped and suddenly everything went back to normal, and it didn’t. There was food rationing for years after the war. One of the big things we suffered in the war was [a] fabric [shortage]. People were making do with what they had, and doing exactly what Ada did, which is look at a blouse and do something to the collar to perk it up, make it look a bit different and a bit better. But it was a very, very difficult time for clothes.

What is the oldest piece of clothing that you own?

I’ve got a lovely cocktail dress that my mother won in a ballroom dancing competition with my dad. I think she won it in the late ’50s because the dress is very [of that era]: a beautiful black dress made of gabardine wool with a big, fantastic velvet crossover collar. I had it altered but I haven’t worn it for a long, long time. That’s probably the oldest thing I’ve got.

Do you have a favorite look from Mrs. Harris Goes to Paris?

I like the scene where she’s being fitted for the dress in the Dior atelier. I really love that dress and the little turban on her head to keep her hair out of the way. The final dress is lovely, of course, but I just loved that one. It was a bit more Lesley.

What’s your take on London versus Paris Fashions?

I think Paris had the edge back in the ’50s, because of Dior. But that’s not to say that we didn’t have amazing designers in England as well; you know, Hardy Amies. But the whole fashion world was led by the Dior look in that period, because Dior was changing the shape of a woman, using her body in a different way—nipped in at the waist and that full skirt, very fitted. It was starting to be the kind of look that Twiggy took over in the ’60s; that slim, slim, slim look. But you can’t look at that New Look and not be wowed by it. I was just in heaven the two or three days that we shot the fashion show sequence, watching these amazing replicas of the pieces Dior created. I knew quite a lot about fashion and the iconic designs of that period because of Phantom Thread, but to actually see them recreated, and see the few that the Dior archive actually lent us, was just wonderful.

Since you bring it up: Would Cyril Woodcock from Phantom Thread have helped Ada Harris?

That’s a good question. Well, we know what Cyril was like—a little bit of a snob. Would she have helped her? Let’s say yes. Slightly reluctantly, but yes.