Keeping Up With the Tarygaryens 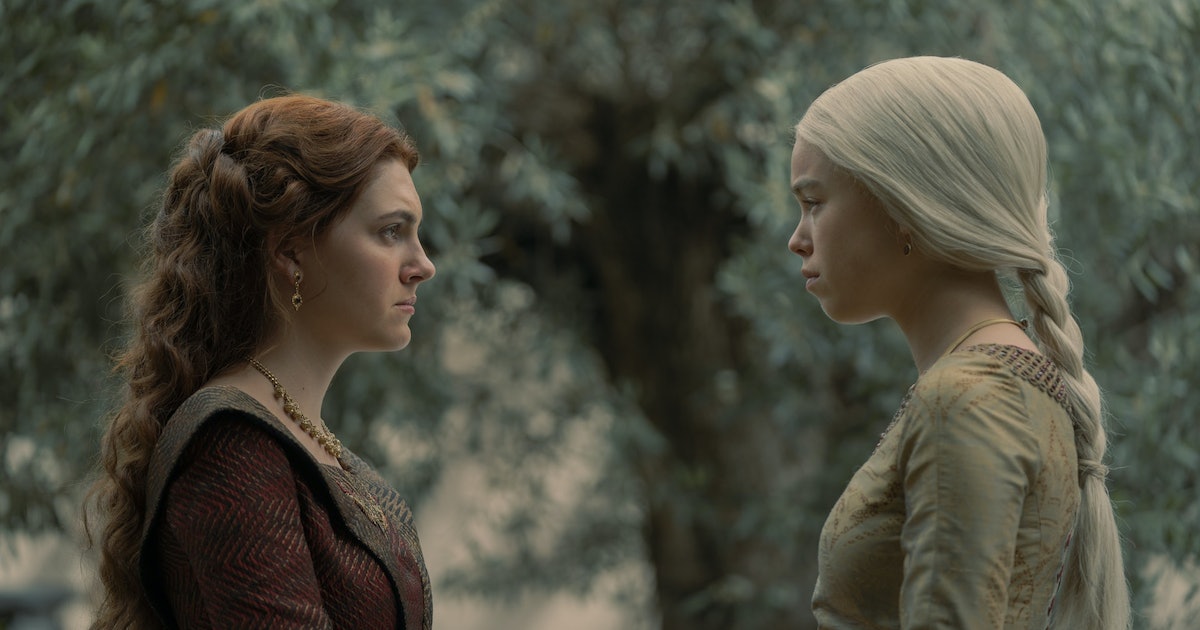 House of the Dragon set itself apart from Game of Thrones this week when it pushed aside basically every storyline involving a character not-named Targaryen (not that there were many to begin with). While Thrones swept across Westeros throughout almost every episode of its run, jumping back and forth between regions and houses, Dragon has remained almost completely sedentary in King’s Landing, and never more so than this week. The result felt like a bottle episode of a sitcom, emphasized by the focus on familial relationships, and the hijinks painted in a quintessential Thrones-ian darkness. Missing only a laugh track, “King of the Narrow Sea” included tropes that allow it to fit squarely in with Full House, Cheers, or The Fresh Prince of Bel-Air, you know, if The Fresh Prince included more incest and child brides. There was the rebellious teen sneaking out (and of course getting caught, forced to learn her lesson), the over-dramatized hangover, marriage troubles, and references to characters that have yet to—and possibly will never—appear (will the Bronze Bitch please stand up?). Honestly, there was enough there that I can’t help but imagine Rhaenyra, Viserys, Otto, and Daemon in a title sequence akin to Friends, Daemon pausing in the middle of a joust or Alicent stopping mid-childbirth to wave at the camera as their name appears on screen. I’m counting on YouTube to deliver that vision, but in the meantime, let’s cast NBC’s newest sitcom, House of the Dragon.

The Unhappy Couple — Viserys and Alicent

Yes, they sired a boy, an undoubted win for any medieval king, but this relationship is not without its issues. And while we don’t get quite the sharp insult comedy between the two that drove sitcoms like Married…with Children, I have to imagine Alicent has some age quips sitting on the tip of her tongue that she is just too polite to say.

Every family-based sitcom has that one episode where one of the children breaks a rule, gets caught, and learns their lesson. “King of the Narrow Sea” was that for Rhaenyra. Her rebellious nature is emphasized in the beginning of the episode when she cuts her tour de men short, against the wishes of her father. But that is just the beginning for the Princess. It’s when she sneaks out of the castle, dressed in a disguise so terrible, only the blind witch she passed in the alley could have been fooled (the blonde hair is peaking out for goodness sake) that she reaches her stereotypical potential. Of course, things take a dark, incestuous, and very non-wholesome turn, but Rhaenyra ends the night in bed with a man who is not her direct bloodline in a scene that would no doubt elicit canned “oohs” from the studio audience.

The most formulaic part of Rhaenyra’s storyline this episode, however, is that, despite her breaking of the rules and negligence in doing so, there are almost zero consequences for her actions. She is still the heir to the Throne, despite Viserys’ weak threat to remove her. Yes, she now must marry Laenor Velayron, but if this show continues its charade as a disguised situational comedy, the young couple may just find some love in this arrangement.

The Uncle Who Lives Upstairs — Daemon

Daemon kind of gives Uncle Jessie energy in this episode. That’s not to say Jessie ever had a thing for D.J., Stephanie, or Michelle, but pre-sneak out, Daemon and Rhaenyra did have a fairly favorable relationship, all things considered. Unfortunately, in the world of Dragon, we can never have nice things, and the sweet relationship between Daemon and his niece had to turn sexual. “You Targaryens do have queer customs,” Alicent quipped, the laugh track begging to play behind her.

He embodies that role of the character who pops in and out, causes trouble, is forced to learn a lesson time and time again, and, in the vein of Cheers’ Norm, mentions a wife we have yet to see actually exists. Plus, that new haircut, and bold entrance at the start of the episode would undoubtedly make a studio audience go wild.

Admittedly, it isn’t the best comparison, but this sitcom theory may be my Abed in Community-like way of coping during this subtly disturbing episode (there was dramatically less blood, but the writers still found a way to sow discomfort). But now that I’m in this mindset, I’m expecting a wedding episode next week, perhaps with a runaway bride, a last minute emotional plea from Daemon, and maybe some more comically bad disguises.