Joe Keery on His New Album ‘Decide’ and Leaning Into Nostalgia 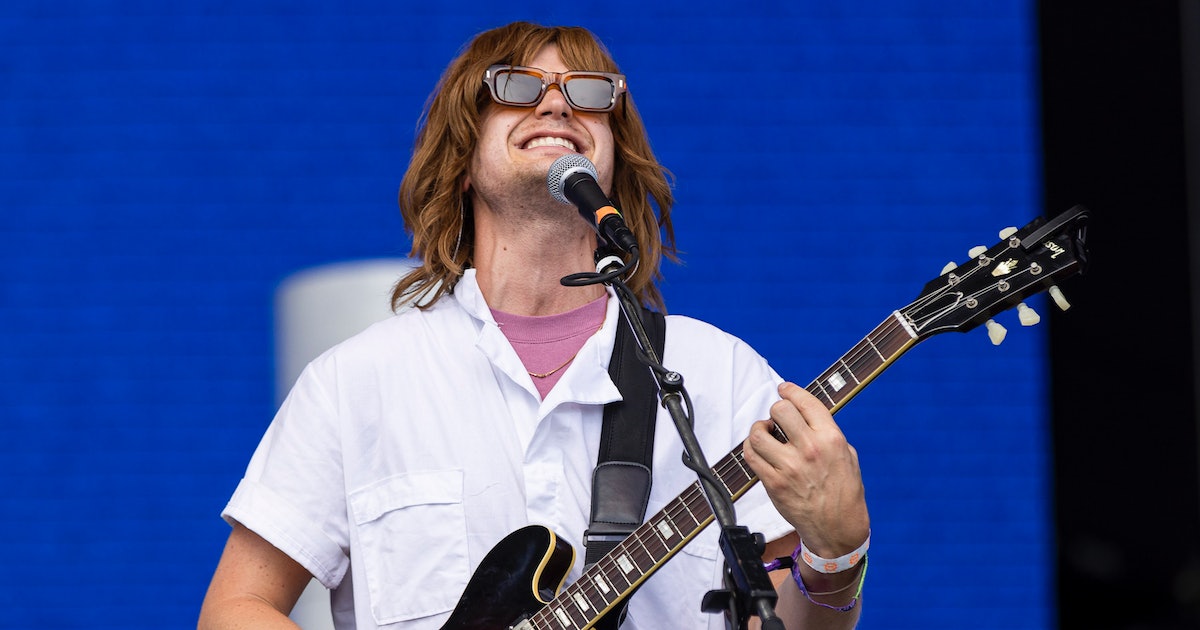 The morning after Joe Keery’s set at Lollapalooza, the musician and actor is in the mood to celebrate. Sprawled out on a couch at the Chicago Athletic Association, he raises his eyebrows suggestively. “I could go for a Bloody Mary,” he says, glancing around to see who can be goaded to drink before lunch. And thus, a round of drinks appear.

Keery is hardwired with the Midwestern friendliness he absorbed during his time as a student at DePaul University in Chicago, where the music festival took place in July. (We spend a chunk of our allotted time together talking about beloved dive bars in our shared northside neighborhood and the absurdities of high school theater.) Between his unshakable eye contact and reciprocal conversation, it’s easy to forget that he is a global sensation thanks to his role as Steve Harrington on Stranger Things—that is, of course, until he clocks a gaggle of indiscreet fans on the hotel balcony and seamlessly lowers his sunglasses over his eyes.

Summer has been busy for Keery, who celebrated the release of Stranger Things season four and his inaugural Lollapalooza performance. But while the seasons transition, Keery finds he is just getting started. His sophomore album, the psychedelic confection Decide, which he is releasing under his moniker Djo, is out September 16th. Below, Keery talks with W about nostalgia, musical influences, and the many Geminis in his life.

You have quite a personal history in Chicago, which you touch on in your song “End of Beginning.” Can you speak to the role that the city has played in your artistry?

It was the jumping-off point for becoming the artist that I am. I went to school here and had a lot of friends here, and I moved from a small town in Massachusetts to Chicago. How can that not have a big influence on you? I’m 30 now, and everybody looks back on their early 20s pretty fondly. Mine just happened to be here.

Were you nervous to play Lollapalooza?

All weekend, I’ve been so nervous. It’s very bizarre, there are a lot of out-of-body moments. Shooting stuff on a set is very contained. It’s like doing a play: it’s live and there are stakes in the moment and there are technical challenges and things that could go wrong. I don’t think I’ll ever be really, truly satisfied, because you’re always critiquing the performance. What I want to try to do is to lean into the mistakes.

The first time I listened to Decide, there were moments that struck me as David Byrne-esque. Who are some of your biggest artistic influences?

Definitely David Byrne. His gusto and his freedom was something that I was trying to [emulate.] Also Devo, after the fact, but that leaked in there. Queens of the Stone Age and The Strokes. It was fun to play a character.

I’d love to talk about your stage persona. Do you create boundaries between you and Djo?

Originally, it was to distract from the other stuff I’m known for. It was a way to disassociate the music from that and try to allow people to listen to it with an open mind, and what it’s evolved into is this character. It’s changing and shifting as the project goes on. Obviously, the music is really personal. Lyrically, I’m writing all from me, but sometimes with the delivery it helps to view it from [asking] “What are the influences here? What are we trying to evoke?” I’m interested to see what continues to happen with it, because the word is getting out. So do I need to do it anymore? Is it still important? I don’t know, we’ll see.

Let’s get into the Culture Diet questions. How do you get your news?

Reddit. The New York Times will email me shit every day. I’d say mostly talking with my family. We are all talking every day.

What’s the last thing you Googled?

Mephisto shoes. They’re the best pair of shoes that I’ve ever had on set.

What are you reading right now?

The Kid Stays in the Picture, which the show The Offer is based on. It’s about Robert Evans. I’m also simultaneously reading this book called The Maid [by Nita Prose].

What show is keeping you up at night?

I’m watching My Brilliant Friend on HBO. I feel like there’s not a lot of content about friends, female and male relationships. I mean, obviously, besides the show Friends, but it’s cool to just watch a show about a really complex relationship. And there’s that whole thing about how nobody knows who [Elena] Ferrante is. I love that—that’s right up my alley.

What is the last movie you saw in theaters?

Everything Everywhere All At Once. Pretty fucking awesome. It felt homemade, it didn’t feel glossy. It felt like Being John Malkovich and like The Matrix. The Daniels, bravo.

I’m a Taurus, which I feel pretty connected with. Natalia Dyer is very into it. I love to talk with her about it, she always has cool insights. I have a lot of Gemini people in my life—my best friend, my niece, my girlfriend, my uncle, like, three of my friends from Chicago.

What song or album do you have on repeat?

L’Impératrice, they’re a French group. Their album Tako Tsubo is fucking amazing. I’ve also been listening to my Post Animal boys, [their album] Forward Motion Godyssey, a bunch. There are some tracks on that album that hit incredibly, incredibly hard. It made me sad at the time. It was difficult to listen to because it was them doing something without me, which was happy and sad. It’s that nostalgia that we were talking about. Your friends are growing and changing and doing stuff. I’m just so proud of them because I realize how much of an influence it actually had on me, also.