How Iris Van Herpen Reshaped Couture for a New Generation 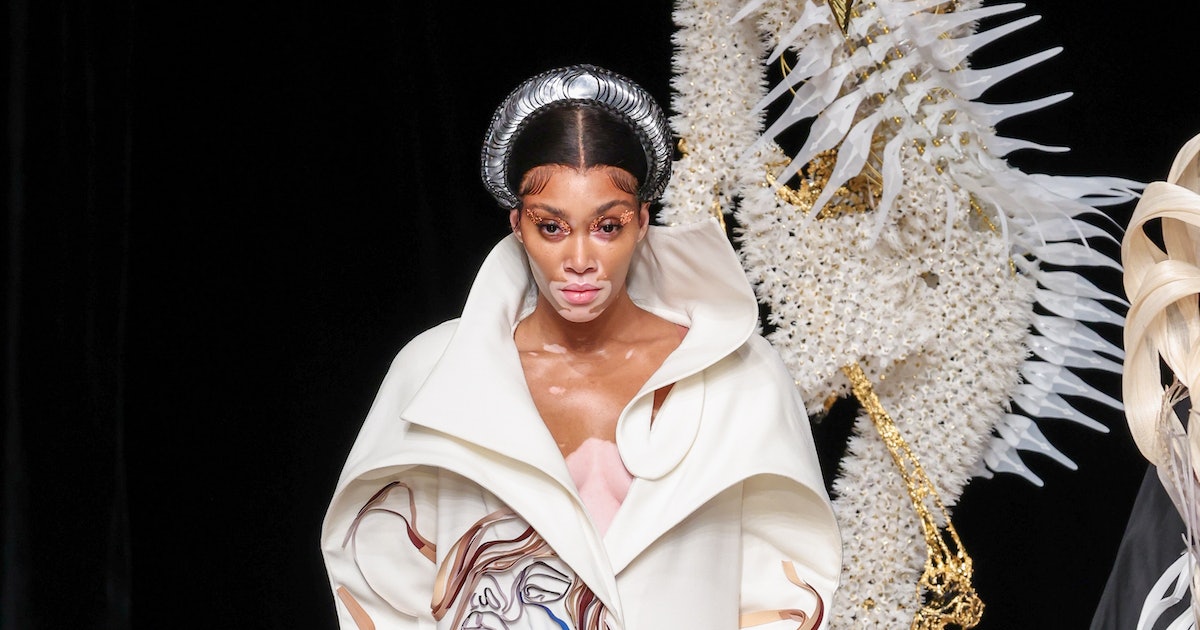 During a hot summer afternoon at the Élysée Montmartre theater in Paris, the Dutch designer Iris Van Herpen tinkers with the last few stitches of her fall 2022 couture collection, one day before the show is slated to debut on July 4th. But instead of reworking a piece of traditional embroidery or tailoring an uneven hem, Van Herpen is looking over 3-D printed fibers made from cocoa beans that form a jumpsuit with copper-coated details and upcycled organza. In another corner, a team inspects wing-like 3-D printed shoes, while others ensure a futuristic gown made of bananas that were turned into biodegradable fabric and combined with raw silk is ready for its big runway debut. It all may seem like a complex experiment conducted in a scientific laboratory, but this is just another Iris Van Herpen collection.

2022 marks the 15th anniversary of Van Herpen launching her own label—a fashion brand that truly feels like it defies all traditional categories associated with the industry. For one, Van Herpen’s work is instantly recognizable for its almost cyborgian regality. The designer has created tech-infused fashion since she debuted her namesake line in 2007, and was one of the first widely known fashion designers to employ 3-D printing for high-end fashion garments—which naturally lends itself to a futuristic, structured look. Her unique aesthetic has been a major draw for the celeb crowd, as she has dressed everyone from Björk to Lady Gaga and Grimes, and more recently she dominated the 2022 Met Gala by custom designing pieces for Dove Cameron, Teyana Taylor, and Winnie Harlow. She’s also branched into other design projects, creating a curated lingerie collaboration with the brand Aubade as something of a celebration for the 15th anniversary of her label. Next year, Van Herpen will have her first major exhibition at Paris’s Musée des Arts Décoratifs, chronicling her nearly two decades of boundary-breaking designs.

Iris Van Herpen and Dove Cameron at the 2022 Met Gala.

But the distinctiveness of her work goes even deeper: Van Herpen is one of the rare few designers who only does couture. That means almost every single piece is one-of-a-kind, since even her runway garments are tweaked ever-so-slightly when clients order them. The designer has approached couture—an age-old tradition that often leaves much to be desired in terms of innovation—through the lens of her own multidisciplinary background. Many of her pieces also challenge the idea of wearability in that they are quite fragile, as well as extreme—with features that literally move, laser-precise 3-D printing that stands in for traditional boning, and even pieces made of glass.

Why would such a multifaceted and future-focused designer place their bets solely upon couture, a corner of fashion reserved for old-school, fait-main sensibilities? Van Herpen thinks the world of couture is currently changing rapidly (for the better, she notes), keeping her from turning to traditional ready-to-wear. One could also argue she’s a major part of that change. “From my own perspective, couture has always been the inspiration for ready-to-wear,” she tells W from inside her show venue, the day before the runway show is set to take place in Paris. “But now, couture is becoming the laboratory of ready-to-wear, with the developments and innovations that we are doing in terms of materiality.”

The garments of her fall 2022 collection exemplify Van Herpen’s tech-infused work, and culminated in a show that sought to take this very concept to new heights. Van Herpen looked to Ovid’s Metamorphoses for her ultimate inspiration, basing floaty, ethereal dresses that look ready for an angelic future on the poems Daphne, Arachne, and Narcissus. “The connection is inspired by hyperreality and posthumanism, so it really dives into the future of where we are now with the metaverse at our horizon and what we’ll be spinning off of those new realities,” she says. “Some themes in those poems are so timeless that they’re actually very relevant now.” Van Herpen points to questions like, “Who are we beyond our physical bodies?,” and the idea of a narcissist who falls in love with his own reflection.

The 16 physical looks designed for the collection also came with three digital versions worn by avatars—initially expected to be presented to the audience during the show alongside the IRL runway with mixed-reality headsets as well as an interactive experience on all guests’ phones. The hybrid experience didn’t work out due to a tech issue, but guests were nonetheless spellbound by the dazzling gowns, which resembled exoskeletons. A surreal, frozen-in-time, human-meets-creature skeleton sculpture in the middle of the runway by Casey Curran also drew a crowd, where celebs like Julia Fox posed in custom pieces from the label.

Van Herpen acknowledges that the tech approach she employs in her work might scare certain stalwarts of the fashion industry. “Some people are afraid that the digital will replace the physical, but that will not happen,” says Van Herpen of her unconventional approach to materials in couture. “They will live together and they will also influence each other.”

A focus on tech is imbued into her work as a testament to sustainability and how fashion can create innovation that helps, rather than harms, a future earth. Since the majority of her pieces have a 3-D printed element, they’re designed digitally first—making each one ready for the metaverse. “Brands will produce their collections digitally and then monitor what people actually want to have before going into physical production, which is actually quite close to the whole couture process with the client,” Van Herpen says. “You have a more direct connection so there’s no overproduction.”

Her fall 2022 couture collection combined these unusual techniques with the intricate handiwork and details that have become synonymous with the brand. “Each piece took three to four months from the beginning till the end,” she says. The dedication and time is also something she puts into every single custom look, seen on celebs and VIP clients. Each piece produced as a custom one-off goes through rigorous fittings to make sure every 3-D printed thread fits just right. “I remember some people having tears during fittings,” she adds. “It can be a very emotional reaction if you work on a custom piece, because you work on it together. The customer gives ideas and influences as well, so when she puts it on for the first time, it’s this moment of transformation that everyone is feeling.”

Van Herpen’s work has often been regarded as a piece of fine art rather than something a typical consumer would wear in their everyday life. Of course, there are differing opinions on whether fashion is art (Miuccia Prada referred to fashion as being commercial rather than art in 2013, but others feel the intersection between art and fashion has never been as strong as it is now). Van Herpen’s work certainly speaks to this topic—and when I ask how she regards her own oeuvre, the designer responds at great length, clearly having given this topic some thought. “Not all fashion is art, but definitely, the origin of fashion is in art. And there are still artists out there that have the understanding and the soul and the dedication to bring it to that sphere,” she says, adding that the bulk of Van Herpen’s clients are people who collect or purchase artworks as well. “They don’t see the difference between a painting or buying a sculpture for their body, so it’s definitely art, but of course, there are different layerings within fashion.”

She has another thought on the idea of artists versus designers. “I don’t really want to distinguish myself from being a fashion designer because I am a fashion designer,” she says with a laugh. “But perhaps I’m both an artist and a designer.” You’ll have to ask her again when her retrospective opens at the Musée des Arts Décoratifs next year.