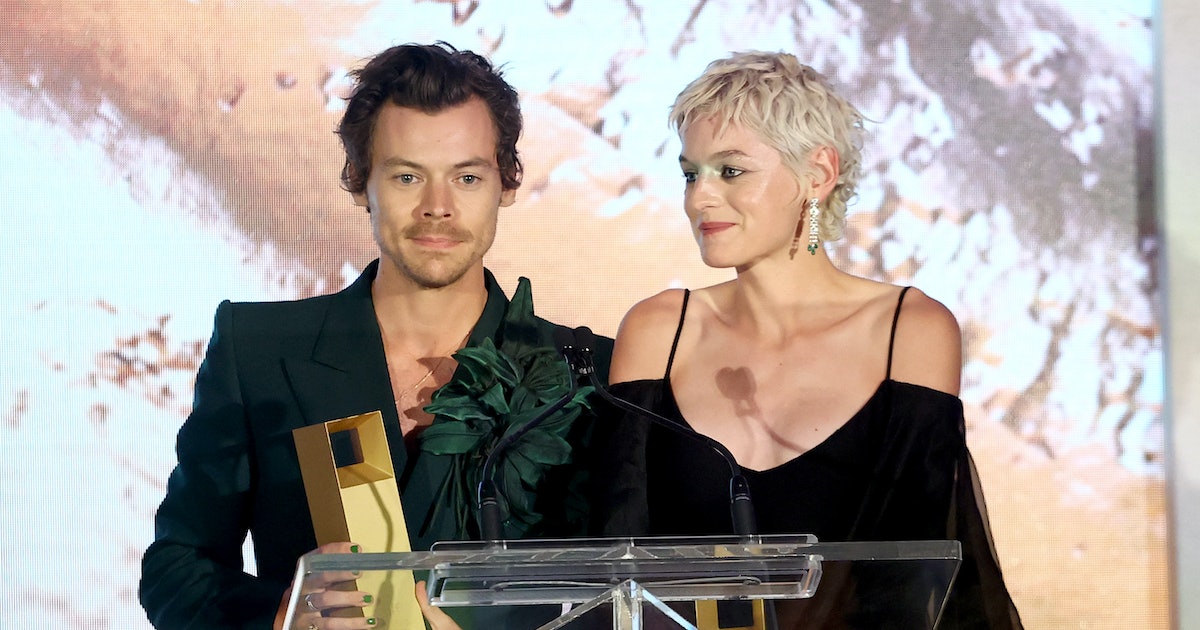 With all the drama surrounding Harry Style’s upcoming film, Don’t Worry Darling, it’s easy to forget that, at the moment, he’s busy promoting an entirely different movie as well. What attention can be paid to something as unsensational as My Policeman, which premiered on Sunday night at the Toronto International Film Festival? Actually, apparently, this film deserves just as many eyes and tweets in its direction as Darling, because Policeman had a successful premiere last night (a lot better than his turn at Venice, at least, though, admittedly, the bar is fairly low), and we can’t help but think Styles breathed a sigh of relief when he woke up this morning and found an Internet devoid of accusations that he spat on Emma Corrin.

Clearly, Styles felt like he needed a bit of luck on Sunday and he seemingly didn’t leave anything to chance. The singer arrived at the premiere of Policeman dressed in a look that can only be described as “Leprechaun couture,” clearly hoping some Irish luck would do him good. Styles wore a complete Gucci ensemble, made up of a dark green, double-breasted jacket featuring an oversized, lily-adorned broach. On the bottom were tailored pale mint pants, white boots, and a Kelly-green Gucci 1947 bag, which Styles totted around throughout the night by its bamboo top handle.

The artist was joined by his costar, Corrin, who similarly demanded attention in their custom Miu Miu look, a dramatically high-cut leotard that allowed for maximum leg display, featuring off-the-shoulder bell sleeves the erupted from each arm into a tulle train. Corrin then finished off the look with sheer black tights, black pumps, and a faux freckle on their right cheekbone. The threesome of stars was completed by David Dawson, who kept his look relatively simple in comparison to Corrin and Styles, opting to wear a black Christian Dior suit made up of a double-breasted jacket with a slightly longer cut and some cargo dress pants.

The trio had a successful night, taking home the Tribute Award for best ensemble, along with their costars Rupert Everett, Gina McKee, and Linus Roache, who play the older versions of Dawson, Corrin, and Styles’ characters in the film, respectively. But while there are no articles about a feud between Corrin and Styles, or a tense interaction between the singer and Dawson spreading through the Internet this morning, the reviews of the film are not exactly glowing. Collider suggested Styles’ Tom may have been in better hands “with a more seasoned actor,” as Styles is “uncertain and nervous” in the role. Meanwhile, The Guardian described him as “all construct and no conviction,” and “a performer as unsure of his ability as we are.”

It’s possible, that between the drama of Darling and the divided reviews of his acting, this duet of movies could be the end to Styles’ turn as an actor. In a recent interview with Rolling Stone, the artist admitted that he doesn’t plan on doing another movie for awhile. “A large part of acting is the doing-nothing, waiting thing…I don’t find that section of it to be that fulfilling. I like doing it in the moment, but I don’t think I’ll do it a lot,” he said. Styles admitted that he may, at some point, “crave” acting again, but it’s hard to imagine he will ever crave a repeat of this past week.