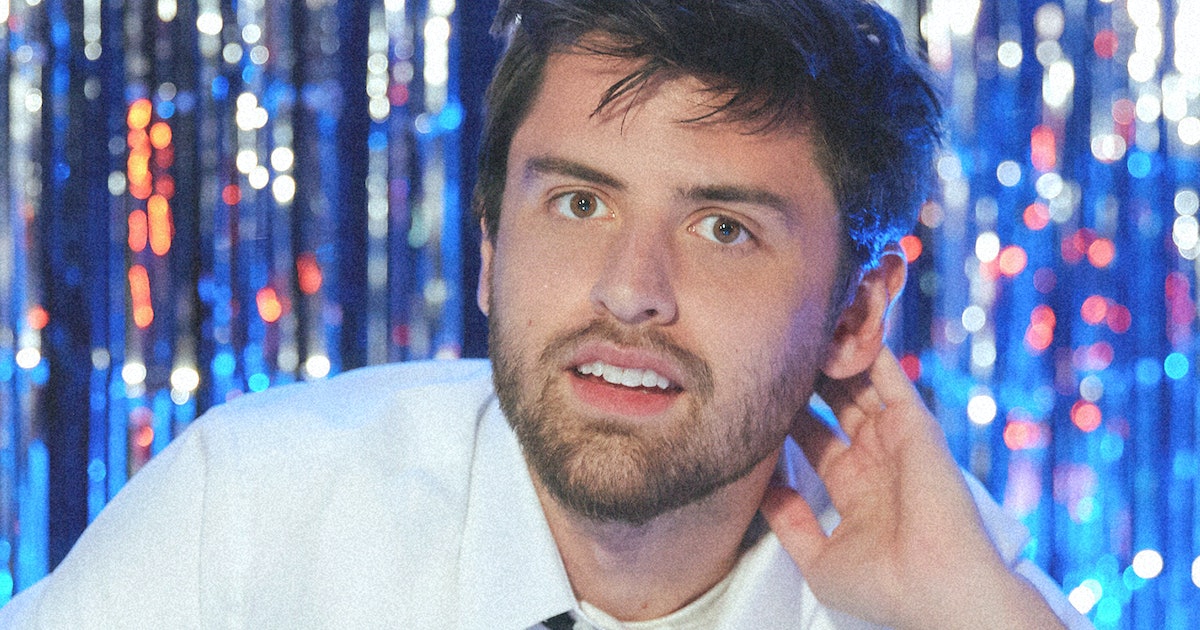 Cooper Raiff insists he has no skills when it comes to getting a party started. But for his sophomore feature film, the 25-year-old—who has already carved out a niche as the lead actor, writer, director, and producer of his own projects—was able to parlay his childhood memories of attending bar and bat mitzvahs into a bittersweet romantic comedy about people who pass each other like ships in the night.

The winner of the Audience Award at the 2022 Sundance Film Festival, Cha Cha Real Smooth—which is now streaming on Apple TV+ and was acquired by the streamer for a reported $15 million—follows Andrew (Raiff), a recent college graduate who returns to his hometown in New Jersey without a clear path forward. But after accompanying his younger brother, David (Evan Assante), to a friend’s bar mitzvah, Andrew unexpectedly becomes the life of the party and meets Domino (Dakota Johnson), a mesmerizing, 30-something single mother, and her autistic daughter, Lola (Vanessa Burghardt). As he begins to work on the local bar mitzvah circuit as a “party starter,” slash “hype man,” Andrew grows closer to Domino, leading them both to question what they really want at different transitional moments in their lives.

“I’m very introverted, but the idea of someone who’s really good at starting other people’s parties and is not good at starting his own party is something that I very much relate to,” Raiff tells W over Zoom. “I’ve had trouble in my 20s because it’s this time when you can really figure out who you are and take responsibility, and you probably don’t have a family yet. But I think Andrew is someone who desperately wishes he was 32, and I feel that a lot of the time.”

Creating charming characters at various stages of self-discovery became Raiff’s modus operandi long before he burst onto the scene as a multi-hyphenate filmmaker at the start of the COVID-19 pandemic. Born in Dallas, Raiff—who had always liked acting and writing, but never wanted to direct—made a lengthy amateur film with two friends during the spring break of his sophomore year at Occidental College in Los Angeles. Once he uploaded it to YouTube, Raiff tweeted the link to filmmaker Jay Duplass, daring him to watch his home video and email him afterwards. Less than 24 hours later, Duplass did just that. He soon took Raiff under his wing, helping him turn “this really crappy movie” into a disarming debut feature, Shithouse, which premiered virtually and won the Grand Jury Prize for Best Narrative Feature at the 2020 SXSW Film Festival.

“I didn’t want to be a director in any way, but all the conversations with Jay helped me realize that I am a director and that is what I love to do,” Raiff says. “I had asked 10 people to direct my first movie, and at some point, Jay was like, ‘No one wants to direct your college love story. You have to do it.’ And on day five of that shoot, I really fell in love with directing.”

Following the success of Shithouse, Raiff began to develop pitches for his next film, but he kept coming back to a character—the mother of a child with autism—that he had created as a freshman in college. “My sister’s disabled, and my mom once told me, ‘My life has really been defined by your sister’s stages, and it always will be defined by her stages.’ And I was like, ‘I don’t know what to do with this information other than write it down.’ So that was a character that I had been writing little scenes for,” such as the ice pop scene in the trailer, Raiff reveals.

By the time he pitched Cha Cha Real Smooth to Johnson and Ro Donnelly, who had recently formed the production company TeaTime Pictures, Raiff decided the character would continue to cross paths with “this 22-year-old dumb kid” on the bar mitzvah circuit. Unbeknownst to the producing partners, he had yet to write a single page of the script—so he put together the first iteration within a week of their first meeting. “They gave me so many notes and had so many questions: ‘What’s this scene about? Why is this here?’ I think the biggest note was figuring out how to sprinkle in the fun,” Raiff explains. “I was too cut and dry with what I was trying to do with the movie. I like to write funny things, but they helped me broaden the world a bit more.”

With an intimate yet sprawling story that features characters from multiple generations, Raiff worked collaboratively with Johnson and Burghardt, in particular, to ensure they were telling a narrative that felt grounded and not exploitative. “The script was just bare-bones until the actors came in,” Raiff says. For instance, “Lola was not written like that. There was a certain thing that was written, and then Vanessa came in, and [we were] constantly trying to keep up with her.”

“I never wanted to pretend I knew anything about Domino, and I think one way to be careful is to make sure you’re telling this story through the lens of the 22-year-old, who I do know very well,” he adds. “I never wanted to act like we’re showing you everything about Domino. We’re learning about these peripheral characters like Joseph [Domino’s fiancé, played by Raúl Castillo] as Andrew is learning about them.”

Johnson played a pivotal role at all stages of the creative process, helping to craft the character of Domino and even convincing Raiff to act in his own movie again by reassuring him that she and Donnelly would have his back behind the camera. Having watched a handful of Johnson’s previous films, Raiff was acutely aware of her strengths as a performer. “You think you know what she’s feeling, but I really love that moment where Andrew’s like, ‘Is this what you’re feeling? I think we have something that we’re not saying, but what is it?,’” he says. “The reason the movie works is because there is an immediate chemistry that Andrew and Domino have—and need to have—because the movie is about them just having met.”

“When we first Zoomed, sparks were flying,” Raiff recalls with a laugh. “Ro was just like, ‘Guys. It’s gotta be you two!’ And I remember I started blushing and I was like, ‘Alright, let me think about it.’ But then when I hung up, I was like, ‘Oh my God, that felt like the movie.’ It felt like all the complicated, perfect feelings that I wanted the movie to have. I think that with my first movie, they loved that I did all of the parts. So they were kind of like, ‘We want to experience that with you, so we can all keep the nucleus as small and as focused as possible.’”

While Andrew’s encounters with Domino and Lola expose him to a future he wants, Domino decides it is better for them to go their separate ways, marrying Joseph and telling Andrew to “do your 20s.” Andrew “is meeting this person who didn’t have that [freedom], and she’s saying, ‘Hey, how scary, but how amazing that you get to have you—and only you,’” Raiff says. “Andrew’s crying so hard at the end not just because he’s gonna miss Domino and Lola, but [because] it’s someone giving him permission to not always be looking out for the person who is in need of his specific love and care.”

After acting in his first two directorial outings, Raiff quips that he is ready to step behind the camera again—and stay there, for once. In September, he will begin shooting The Trashers, a drama that will chronicle the rise and fall of Jimmy Galante (played by Stranger Things’s David Harbour), a Connecticut-based businessman and associate of the Genovese crime family who bought the city’s minor-league hockey team in 2004 and assigned his teenage son A.J. to run it—only to later be arrested on a slew of criminal charges. Raiff is also in the midst of co-writing the TV adaptation of Exciting Times with the author Naoise Dolan (whom he describes as “the smartest person I’ve truly ever met”), with Bridgerton’s Phoebe Dynevor attached to star and executive produce.

“It’s a nice departure from telling such uniquely personal things, but it’s allowed me to fall so hard in love with real people,” Raiff says. “I had to find my way in. Trashers is this father-son story that I relate to, and I do feel like I’m the person to tell the story, but it’s in no way me onscreen. Jimmy Galante is said to be the inspiration for the character Tony Soprano, so it’s got that [crime element]. But at the core of it, it’s just this very underdog hockey movie that I love.”