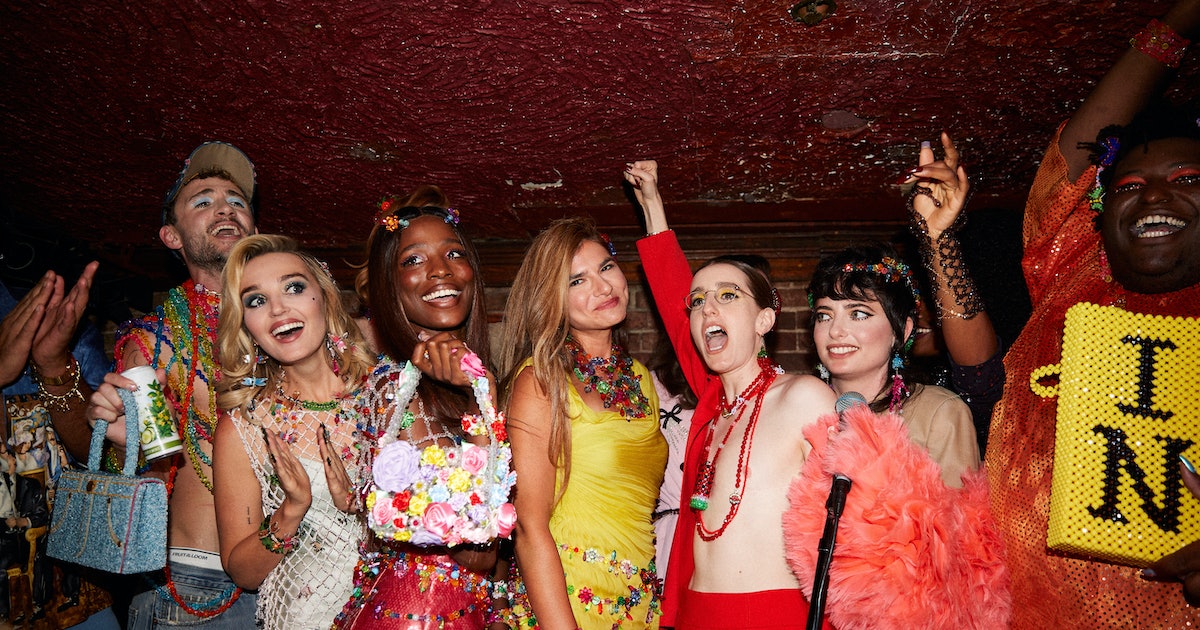 A fashion editor and some comedians walk into New York City’s Comedy Cellar.

This is not the start of some cheesy joke. It’s exactly what happened at designer Susan Alexandra’s Comedy Club on September 8—a one-hour event put on in partnership with Ketel One, Magnum, and The Real Real that kicked off New York Fashion Week and showcased the designer’s collection on the likes of Chloe Fineman, Sydnee Washington, Catherine Cohen, and more of the finest comedians the city has to offer. The consistent characters of MacDougal street—an area of Greenwich Village dotted with memories of NYU, fake IDs, and one too many drinks—were disrupted by saddle bags, beads, and gaggles of the city’s top editors sharing just how many events they were going to that night, as they made their way through the doors of the iconic stand-up venue.

In the Olive Tree Cafe, the restaurant above the cellar, an explosion of color and nerves engulfed comedians like Larry Owens, Jo Firestone, Marie Faustin, and Sarah Sherman as they transformed out of their daily garb and into Susan Alexandra’s cohort of hyper-vivid fruit fairies—Alexandra, of course, acting as their fairy godmother. Just as quickly as they were dressed in her signature beaded bags and accessories, the comedians were booped out of sight, not to be seen again until they hit the stage for a round of stand-up sets.

One comedian in the cellar was Sydnee Washington, who was taking a selfie with Sarah Sherman as she, along with Fineman, waited to be corralled back upstairs. When asked what she finds funny about fashion, Washington replied that it’s all about your vantage point. “It can be whatever you want it to be,” she continued. “There are times when I look at things and I’m like ‘Is that fashion?’ and then somebody that I really like will be like ‘Yes!’ and I’m like, ‘You’re right!’” Sarah Sherman, meanwhile, muttered, “I wear funny clothes,” in response. Both answers encompassed precisely what Susan Alexandra pulled off at her NYFW presentation: perspective, and cheeky, amusing clothes.

It was an effortless collision of worlds, which many comedians noted in their sets. “At a comedy show, we get to see all of these different personalities, with all of these bags that have huge personalities, and I find that there is a ton of parallelism [with Susan Alexandra] there,” MC of the night Larry Owens said. In no other NYFW setting would you ever witness a high-ranking editor get heckled about their name (let alone their outfit)—but the lineup of comedians not only did, they were met with good-natured eruptions of laughter, too. Fineman directly addressed Ella Emhoff, a person she’s parodied on SNL, before going into a string of impersonations of what various celebrities might sound like while having an orgasm. And W Magazine columnist Cat Cohen closed out the night with a number about astrology bringing Susan Alexandra’s vision to fruition. “It’s really funny to check yourself—nothing is that serious. It’s realizing how lucky I am to be in this ridiculous profession,” the designer said. Frankly, fashion is better for it.