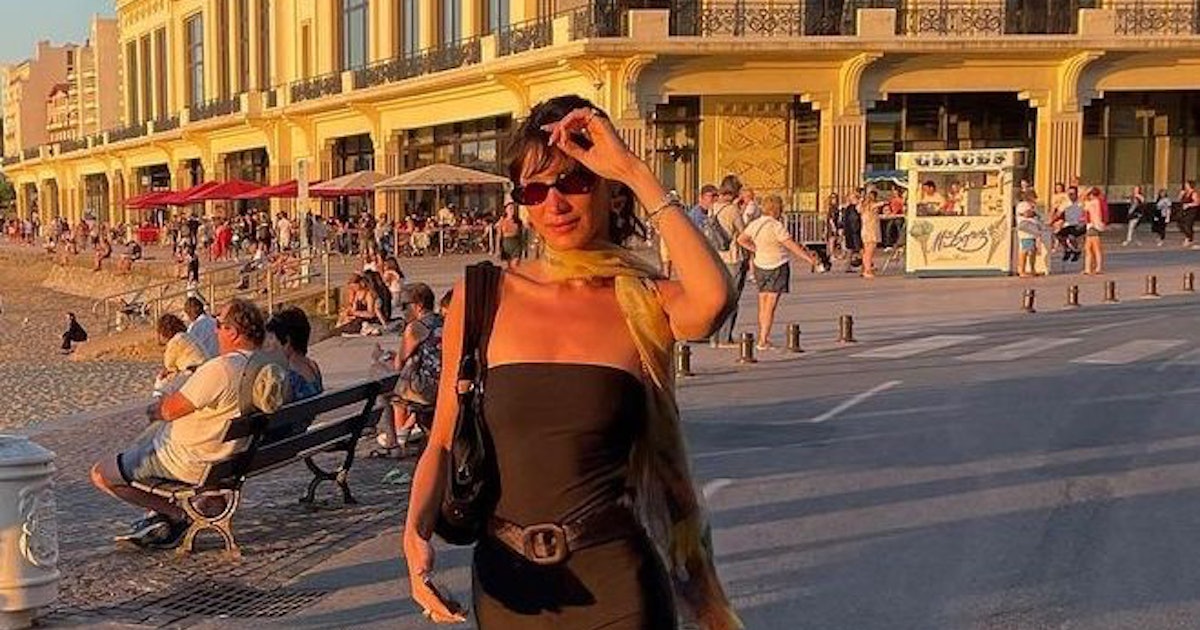 Bella Hadid knows how to celebrate, because what better way to follow up a moment like walking in the Balenciaga couture show, than to escape to a seaside European town with your partner? Just like how the model headed to St. Barths for some R&R following her highly successfully Cannes appearances in May, Hadid has left Paris and is now relaxing by the ocean with her boyfriend, Marc Kalman, and she’s doing so in style, of course.

Hadid shared a set of envy-inducing photos to Instagram on Tuesday, showing off a day on her little European get away. In the pics, Hadid is seen strutting by the ocean in a look that is very Audrey Hepburn meets Grease, like if Olivia Newton-John were to sing You’re The One That I Want right before getting whisked off on a Roman Holiday.

Honestly, the ensemble is a bit of an odd one for the beach. Instead of wearing a bikini, or flowing dress, Hadid opted for tight black capri-length jumpsuit with a strapless top, a black belt placed on her waist to add some dimension. We would report her for stealing this piece from the Grease set if it wasn’t for the cutouts on the sides, which added a bit of a modern touch to the look.

The look then veers into the Hepburn territory with it’s styling—oval sunglasses, little kitten slip-on heels, and a Miu Miu scarf wrapped around her neck that blew in the wind as she walked near the water (and would no doubt look wonderful on a moped). Wearing her hair up, her bangs hitting the tops of her sunglasses, one would have to do a double take before realizing, no, that’s not Hepburn reincarnated.

This is hardly the first time Hadid has embodied ‘50s style. Back in April, the model wore a Yves Saint Laurent for Dior dress from 1959 to The Prince’s Trust Global Gala in New York City. Clearly, we know by now that Hadid loves to bring back styles from the ‘90s and early 2000s, but it’s becoming obvious that she has an appreciation for the ‘50s as well. Maybe, Hadid is even dropping hints that she’s interested in playing Hepburn in a biopic of the actress. With all the other biopics in the works right now, it’s not too farfetched and Hadid is dipping her toe in the acting water. She has the look down at least, there’s no doubt about that.