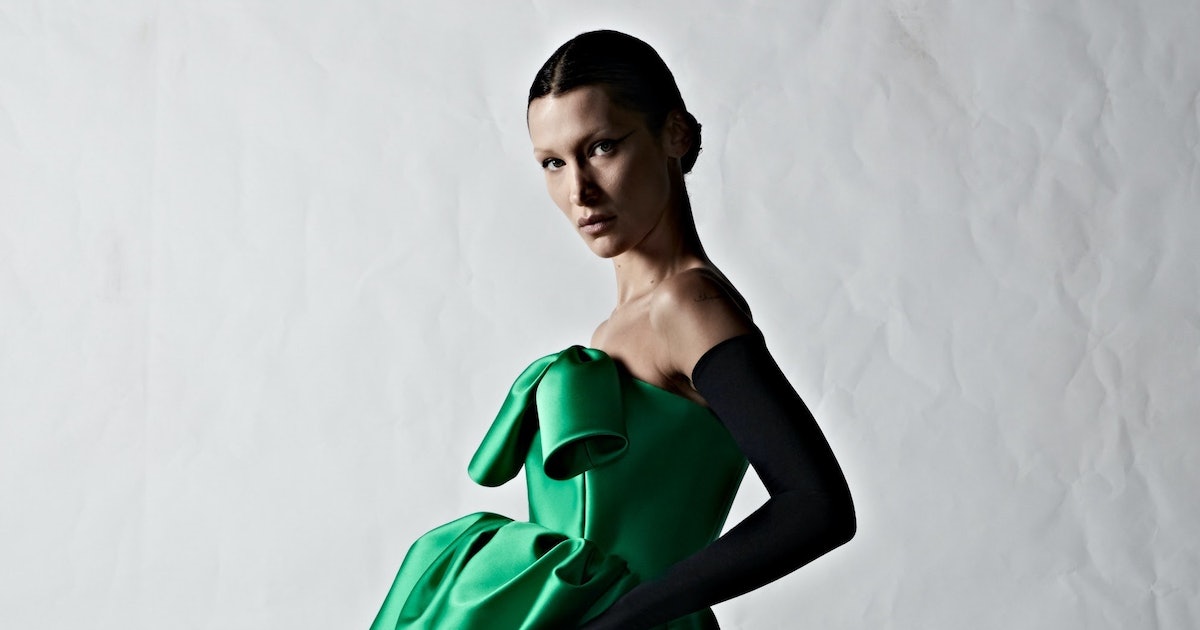 At this point, it seems like anything Balenciaga does is guaranteed to cause major hype. The fall 2022 couture show—creative director Demna’s second for the brand—was no exception. Following a landmark presentation in New York City just a few weeks ago at the Stock Exchange, the collection he’d planned for a Paris unveiling was much more intimate—and filled with celebrities both in the front row and on the runway.

Demna has also become known for the meme-ification of fashion, twisting references and everyday absurdities into his work to elicit an almost Internet troll-level reaction. We’re thinking, of course, about his infamous Croc collaborations, the Hacker Project done in collaboration with Gucci inspired by high fashion knock-offs, and the recent launch of a pair of sneakers the brand describes as “fully destroyed” that go for $1,850; it was clear the fall 2022 collection, too, played with the idea—through the lens of couture.

As guests took their seats inside the all-white venue, the show opened with poetic French statements on likes and dislikes, followed by a stream of models in plexiglass face shields that rendered them machine-like mannequins rather than individual humans. It seems Demna rejoices in repetition—the all-black color palette from which he’s taken inspiration for the past few seasons was visible again in the first part of the collection. Here, it was all smooth Japanese limestone-based Neoprene (reinterpreted as a modern version of Gazar, the fabric invented for Cristóbal Balenciaga), head-to-toe, black dresses dripping in crystals, glittering void-like tinsel gowns, and even shorter mini dresses, all paired with bags that looked like toolboxes made from solid blocks of aluminum (they were, in fact, speakers created in collaboration with Bang & Olufsen).

It quickly became clear this show was a display of the wild spectrum Demna’s reign has to offer: the all-black looks quickly evolved into a procession of slightly more traditional couture, the kind of stuff that might appeal to the Ladies Who Lunch crowd, yet still with the identity-obscuring face shields. Tweed that glittered like diamonds under a jeweler’s light, sculptured tailoring, angelic all-white looks with shoulder pads, matching gloves, and gilded futuristic earrings were all there. A pastel blue look that floated down the runway looked like a fluffy cloud.

T-shirts and denim—what some might call the mighty mainstays of the brand—were present, too. But here, they were given couture-like applications: twisted, tangled, sculpted upwards like they had been caught in a cinematic storm and immediately frozen in motion, by way of aluminum bonding. The jet-beaded jeans and leather pants came cut more precisely and slightly more linear. Here’s where sustainability came into play: over 25 percent of the collection was made with upcycled pieces included vintage bombers, parkas, car coats, and jeans.

The face shields and concept of a removed identity played further into the idea of Balenciaga as a collective idea and aesthetic. The notion of arbitrary identities and aesthetics, along with the concept of brand-as-cult, was further proven halfway through the show, when only the culturally recognizable emerged with their faces showing. These weren’t just any models. They were friends of the house and A-list celebrities. Kim Kardashian walked in a latex bodycon gown while Kris Jenner and North sat front row; Dua Lupa sported a yellow dress; Bella Hadid wore a green cocktail frock with a sculpted bow and high back, and Nicole Kidman donned a silver foiled dress with liquid texture. Naomi Campbell, in a massive funnel-collar dress, bounced down the runway. Selling Sunset’s Christine Quinn donned a silvery cocktail dress and an ice-cold stare for her runway debut.

A procession of cupcake dresses so big they barely fit through the doorways closed the show—the last model’s dress was so huge she had to stop to untangle her feet from the masses of tulle along the runway every few seconds. The piece was beautiful, but almost cartoonish in its volume, like a comically large ball of rubber bands. If the final look of Demna’s couture wasn’t guaranteed to become a meme or go viral on TikTok, it just wouldn’t be Balenciaga.