Artist Alteronce Gumby Sees ‘The Color in Everything’ 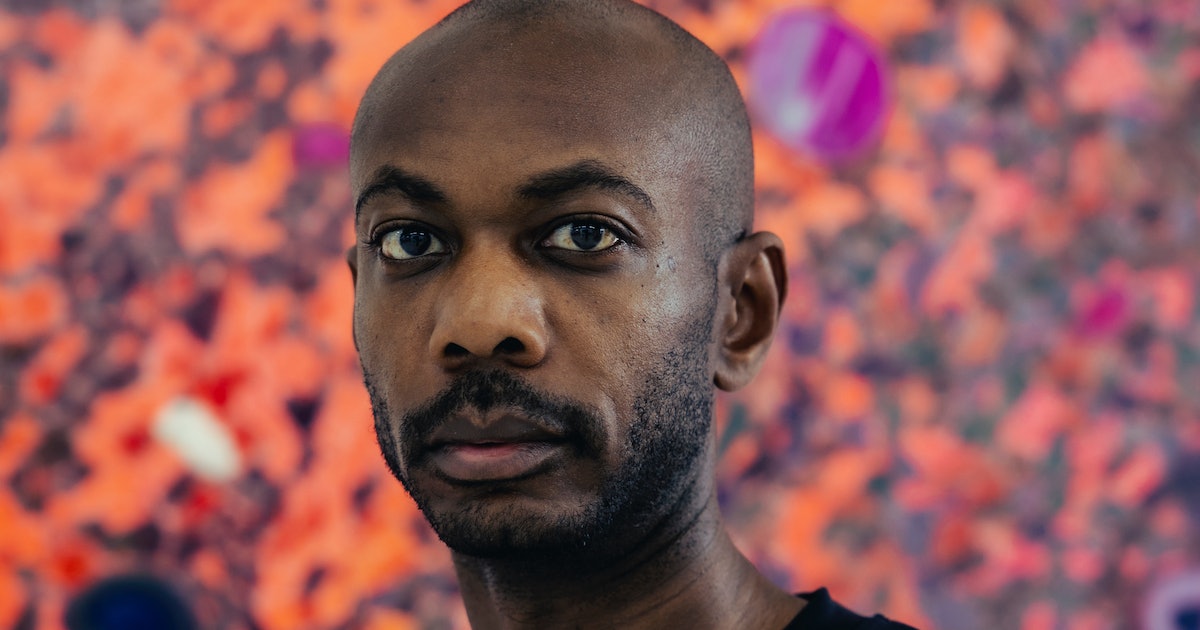 Long before he was a visual artist, Alteronce Gumby was a musician and an architect-in-training—he even dabbled in drama, moonlighting as a student at Yale University. “I’m someone who likes to keep my brain going, and to keep challenging myself,” the abstract painter tells me, speaking over Zoom from his studio in the Bronx on a recent afternoon. “Within that, I can evolve faster.”

Gumby, a Harrisburg, Pennsylvania native who is now based in New York City, has taken that multidisciplinary ethos and applied it to his artistic endeavors, creating a work that feels genuinely fresh and reflective of his remarkable personal story. And the art world has taken notice: not only does Gumby run in the kinds of circles that would draw envy from any downtown voyeur—the playwright Jeremy O. Harris, the Guggenheim Museum curator Ashley James, art critic Antwaun Sargent, and the actor Jonathan Majors are all friends—but he has also gained well-deserved respect from the galleries and institutions he frequented when he first moved to New York in 2006. And on September 8, Gumby’s debut solo show, The Color of Everything, opened at Nicola Vassell Gallery, which will represent the artist going forward.

The works on view at Nicola Vassell through October 31 expand on the signature style Gumby has cultivated since he began making art in the mid aughts. They feature studies of glass, color, light, and the relationship between them—in addition to inspirations Gumby gleaned from “recent events that have happened to me,” he says. (Among them: a trip to Japan’s Naoshima Island, where he visited the Chichu museum; going to Giverny, France to get a glimpse of the Monet’s famous ponds; and becoming a member of The Planetary Society, an organization that encourages space exploration.)

At the mention of space, Gumby really lights up.

“The James Webb Telescope, which launched this past summer, gave us images of distant galaxies and planets up to 13 billion light years in the past,” he tells me. “We’re seeing these nebula or exploding stars in ways we never have before. It’s kind of crazy, just thinking about the mechanics of it all… I feel like I’m really onto new terrain with this body of work that I’m going to be presenting at Nicola’s show. I look at these paintings and I feel like I’ve never seen anything like them out there before.”

Conversation with Gumby often goes this way, hopping between disciplines, sources of inspiration, and references to pop culture. One minute we’re talking about his favorite rappers (Biggie Smalls, Nas, and Jay Z,) and the next, he’s going into Sir Isaac Newton’s prism experiments, which led him to iridescent pigments (a huge topic of interest for the artist). It makes sense that what piques his curiosity span genres—Gumby started out his artistic journey as an aspiring rapper. “That’s what I moved to New York for,” he explains, adding that, at the time, he was also in vocational architecture school—his “fallback career, a safe job.” During a study abroad trip with his drafting program to Spain, he was exposed to the work of Antoni Gaudí and Pablo Picasso, which he says opened his eyes to the possibilities of actually being a fine artist. He signed up for classes at a community college in upstate New York, where teachers took notice of his work; he began winning awards for academic achievement and his instructors urged him to continue making art. Without even knowing it, Gumby had found his calling. “It made sense to me after they pointed it out, because I literally was the first one in the studio and I was the last one leaving the art department at night,” he recalls. “I was getting special passes to stay later in the open studio session because I didn’t want to go home.”

Armed with a newfound “obsession” as Gumby describes it, he returned to the city and signed up for more art classes at Hunter College—an institution located in Manhattan’s Upper East Side, just a stone’s throw away from the art world’s heavy hitters: the Guggenheim, the Frick, the Whitney, the Museum of Modern Art. He and his friends made it their mission to visit these museums, as well as galleries all over the city, on a weekly basis.

But it was at Yale University’s School of Art where Gumby began to explore new, much more personal terrain in his artwork. “I embedded some layer of identity politics within my monochromatic oil paintings to give commentary to current events that were happening at that time in 2015,” he says. “With the emergence of the Black Lives Matter movement, and me being at Yale in a very predominantly white space, I looked to my work to talk about the situations and the emotions that I was going through as a Black man in America. I looked to my work for this form of rationality to the world, but also as a form of escapism.”

In this sense, Gumby’s outlook on color has multiple connotations. Not only is he discovering new shades through a glass prism that reflects the light of his works, he’s also looking to deconstruct the way we as a society define color—one of the central messages of The Color of Everything.