A Dip Into Magical Thinking 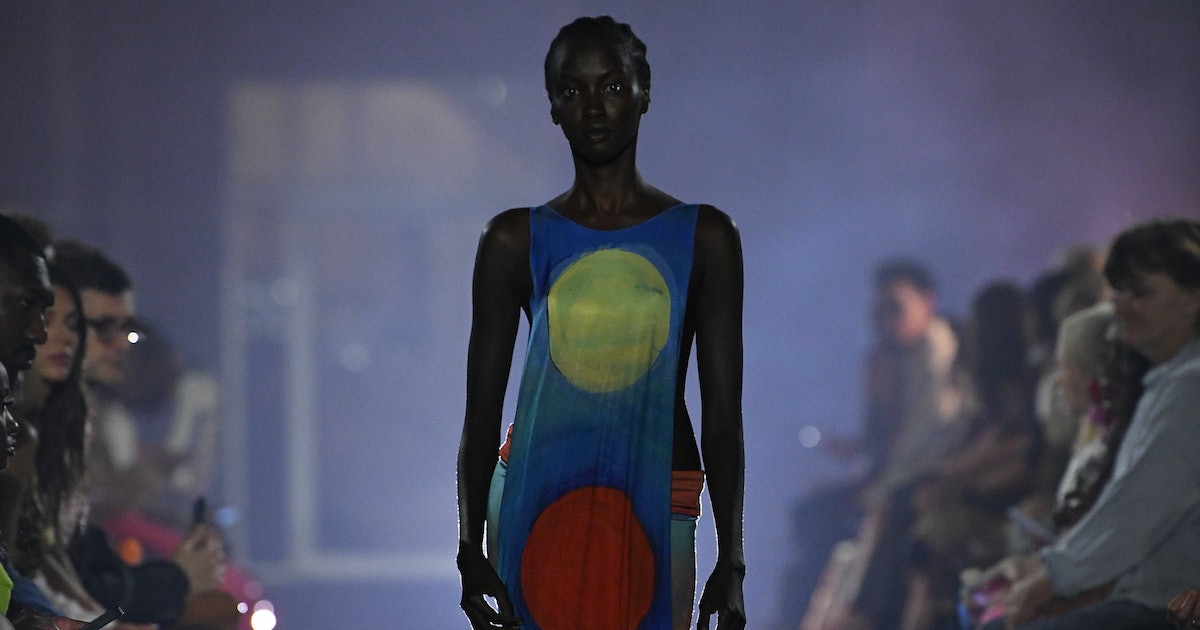 This year’s New York Fashion Week, back in full force for spring 2023, has offered somewhat of a traditional lineup. But Marni, which usually shows in Milan, set out to change all that with its New York City debut, held inside an atmospheric tunnel under the Manhattan Bridge—complete with the roar of the subway overhead and a tightly packed front row that included Madonna, Kendall Jenner, and Doja Cat. Then there was the String Orchestra of Brooklyn, flanking both sides of the runway, dressed all in red, performing a dramatic musical piece by Dev Hynes.

As the lights lowered and a beam shone through the tunnel, the show opened with a barrage of sunset-hued flippy dresses, skirts, jackets, and crop tops in jersey, bursting rays of tropical sunshine into the gritty, cobblestone-covered venue. Next came larger-than-life pastel pants, shrunken knitted tops, and—true to Marni’s slightly-off-kilter form—massive shoulder bags in plush, fluffy textures.

Compared to last season’s show, in which creative director Francesco Risso created a forest-like rave at a Milan warehouse, the spring 2023 collection was rife with pieces that felt suited to the kind of character study that’s Risso’s specialty. Oversize patchwork coats made of fur and mulitcolor leather, plus the ombré polka-dot pants and matching floor-length jacket, appeared to have been ripped from a modern folk fantasy. Reflective mirror tiles on sarongs and bra tops were reminiscent of ’90s Mosaic street art. Some sweaters had a homemade look, as if they were felted by hand, and featured silver beaded chains swaying from the raw edges—the kind of thing a grunge fairy queen might wear.

Organic prints will forever be ingrained in Marni’s DNA, but lately Risso seems to be taking things in a slightly different direction, focusing on softer and more simple graphics and colors. That’s not necessarily a bad thing, but it is a more minimalist spin on a brand that was once so well-known for eye-sweeping prints and chunky, arty jewelry. There were plenty of ’60s and ’70s-inspired references and shapes, too.

Many looks in the collection, worn by the likes of Paloma Elsesser and Lara Stone, bore an inherently mismatched, artistic aesthetic—a collage of bright and optimistic messaging. Part-knit and part-crochet tops had the unique, DIY aesthetic that is so particular to Marni right now.

Overall, the show hinted at the positivity color and soft graphic prints can bring—even more so when mixed, matched, and shaken up with various textiles and finishes. “Every sunset is also a sunrise, somebody else,” the show notes read. “If you are in the right place at the right time, you too can make a sunset. But like a sunset, like a rainbow, like the future, it won’t happen without you.” Imagine how much more cheerful people’s outlook on life could be if everyone wore the sunset.